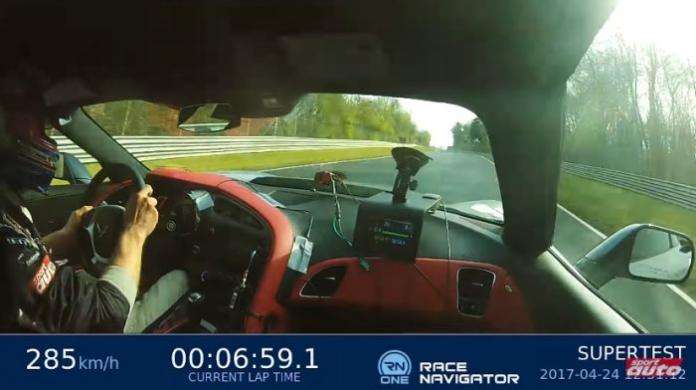 General Motors hasn’t offered up an official Nurburgring time for the C7 Chevrolet Corvette Z06, but the German magazine Sport Auto was able to run a lap of 7:13.9, making it the quickest Corvette and the quickest Chevrolet to blast around the 12.9-mile road course.
Advertisement

Last month, Chevrolet announced that the new Camaro ZL1 1LE had lapped the 12.9-mile Nürburgring Nordschleife course in just 7:16.04 (7 minutes, 16.04 seconds), making it the quickest American muscle car and the quickest Chevrolet or General Motors product to turn in a lap time at the famed German road course. The odd part about the announcement of the Camaro’s stunning ‘Ring time was that GM has never announced an official Nürburgring time for the C7 Corvette Stingray.

The Corvette features the same 650 horsepower engine as the Camaro ZL1 1LE, but it weighs less and, in most cases, it is the quicker of the two Chevrolet performance cars. Unfortunately, when the company took the Corvette to Germany a few years back, they crashed and went home without a solid lap time. Because of that, we are still without a proper Nürburgring record time for the most powerful Corvette ever, but that has changed – sort of.

The German magazine Sport Auto frequently tests new performance cars at the Nürburgring and recently, they headed to the ‘Ring with the C7 Corvette Z06 and the results were mighty impressive – as the supercharged Vette turned in one of the quickest times ever by an American car.

Sport Auto and the Corvette Z06
Last week, Sport Auto magazine posted the video of their testing run with the C7 Chevrolet Corvette Z06, which was fitted with the 7-speed manual transmission and a set of Michelin Pilot Sport Cup 2 tires. Test drive Christian Gebhardt was at the wheel and as drivers at the Nürburgring go, he is about as experienced as it gets. Gebhardt has recently turned in top 20 times with the Porsche 911 GT3, the Mercedes Benz AMG GT-R and the Ferrari 488 GTB, to name a few.

Christian Gebhardt added another car to that list of top 20 Nürburgring lap times by production road cars, as he laid down a stunning time of 7:13.9 – beating the Camaro ZL1 1LE by just over 2 seconds and beating the C6 Corvette ZR1 by nearly 6 seconds. This time also makes the Corvette Z06 the 10th fastest production road car, trailing only the 2010 Dodge Viper ACR in terms of the quickest American cars to lap the ‘Ring. (Note: This excludes the Radical race cars which are sometimes included in the road car discussion, but including them is ridiculous as far as I’m concerned. They are race cars, license plates or not.)

Making this run more impressive is the fact that the Corvette Z06 which Gebhardt piloted around the Nürburgring was fitted with the 7-speed manual transmission rather than the far-more-common automatic gearbox. The automatic transmission Z06 has proven to be superior in terms of performance, so it seems possible that Gebhardt could have turned in a quicker time with the 8-speed automatic, possibly challenging the Viper’s time of 7:12.13, but even with the manual trans – Sport Auto laid down an awesome ‘Ring time with the supercharged Vette.

Best of all, Sport Auto posted a detailed video on YouTube, so we can ride along with Gebhardt as he sets the record for the quickest Chevrolet product to storm around the Nürburgring in the video below.