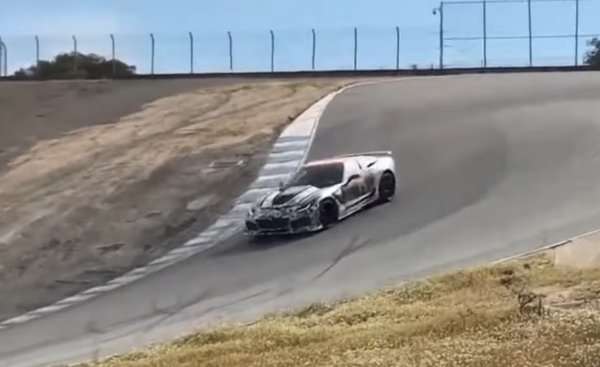 Three new videos have arrived on YouTube showing what is believed to be the C7 Chevrolet Corvette ZR1 doing some testing at the historic Laguna Seca Raceway in California, with and without the huge rear spoiler that we have seen on some of the other spy shots and videos of the test mules in action.
Advertisement

While we still don’t know what it will be called, we know that there is some version of the C7 Chevrolet Corvette on the way which will be more extreme than the current Z06. There have been all sorts of videos and spy shots showing this mysterious Corvette with heavy camouflage, but there have been a few key points with these test mules – the variation in rear spoilers including one huge wing and what appears to be extra cooling vents in the corners of the front fascia.

Even though we don’t know what engine will be under the hood of this C7 Corvette with the elaborate aerodynamics package and the increased cooling vents, we can expect that it will offer greater levels of performance than the C7 Corvette Z06. It might be called the ZR1 or the Zora or even some build-on package for the Z06 – similar to the 1LE package for the Camaro ZL1 – but it definitely appears to be well into the development stages.

C7 Corvette “ZR1” on the Track
The newest spy footage comes in the form of a few videos on YouTube which show the aero-heavy Corvette test car accelerating hard towards the first turn and twisting its way through the Laguna Seca Corkscrew turn, before blasting off towards the final few turns. We don’t really learn anything new from these videos, but we do see the new Corvette with the smaller wing and the huge wing, along with getting a great chance to hear the engine roar under hard throttle.

The first video shows the C7 Corvette test mule charging down the front straight, just past the start/finish line as the driver heads up the hill towards turn one. In this clip, the Corvette is wearing the smaller wing.

In the new few videos, the Corvette ZR1 is coming out of the Corkscrew, with each clip beginning with the car at the top of the hill, winding quickly through the turn and heading off to the next turn. Each time, the driver accelerates a little harder, letting the engine clear its throat. In the first of these second two videos, the whine of a supercharger seems to be present as the car pulls out of the turns, but maybe that is just wishful thinking on my part.

Also, in the final, longer video, we get to watch as the new Camaro ZL1 1LE comes out of the Corkscrew and charges hard to the next turn, with both the whine of the supercharger and the roar of the LT4 clearly audible. If you listen to that and compare the tone to the ZL1 1LE in the third final, there seems to be a supercharger whine present in each.

Image captured from the third video here. Thanks to Belgian Max for the links to these videos!