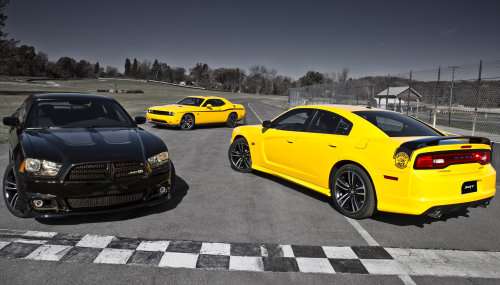 While the recent success of the Japanese automakers doing business in America have pushed the Chrysler Group out of the top spot in terms of year over year growth, Chrysler was able to continue their strong year as they were the only American automaker to show positive growth in July 2012.
Advertisement

While Ford Motor Company and General Motors both posted declines in overall sales growth – with a handful of brands from those two American automakers showing negative growth – all five of the Chrysler Group brands posted year over year sales gains in July 2012. With an improvement of 13%, the Chrysler Group trailed all of the major foreign automakers in the US market but that 13% was vastly better than the negative growth posted by their cross-town rivals.

The top brand from the Chrysler Group was the luxury models that sport the company name as Chrysler brand posted a 35% increase in July 2012. All three of the current Chrysler models showed strong positive growth with the midsized Chrysler 200 leading the way in both sales volume and growth. The 200 moved 9,287 units last month, up 43% from the same month in 2011. The Chrysler Town & Country minivan was second in sales with 8,106 units sold (up 25%) and the flagship Chrysler 300 sedan was third in total sales with 3,399 units sold – an improvement of 41%. On the year, the Chrysler brand has moved 188,546 vehicles which accounts for an increase of 69% compared to the first seven months of 2011.

The next best brand in terms of growth was Fiat and even though the “new” brand is selling just a few variations of the compact Fiat 500, the company continues to show strong positive growth. In July 2012, the Italian company sold 3,710 examples of the 500 in coupe, convertible and high performance Abarth form – up 22% from the 3.038 units sold in July 2011. For the year, Fiat has sold 206% more vehicles in the first seven months than they did in the same period of 2011 with a total of 24,416 units sold thus far.

The Ram Truck brand was third in terms of growth among the Chrysler Group lineup with an increase of 15% in July 2012. The only two vehicles current offered by the Ram brand are the Ram pickup family and the Dodge Grand Caravan-based Ram Cargo Van (C/V), even though dealerships are still selling small numbers of new-old stock Dakota pickups. The Ram pickup family was the top model in terms of both sales volume and growth with 23,824 trucks accounting for a 17% improvement over July 2011. The Ram C/V sent out 555 new models while the discontinued Dakota moved 19 units last month. On the year, the Ram Truck brand has delivered 166,881 new vehicles for an improvement of 18% compared to the same time period in 2011.

Next in line with the Jeep brand which posted an increase of just 7% but with 41,559 vehicles sold – Jeep led the Chrysler Group in July 2012 sales. The Trail Rated brand was led in growth by the Liberty which improved by 34%, followed by the Patriot with a 28% increase and the Grand Cherokee with a jump of 22%. In terms of sales volume, the Wrangler top the charts for Jeep with 12,216 SUVs sold with the Grand Cherokee second with 11,571 units sold and the Liberty was third in sales with 7,803 units sold. Through the first seven months of 2012, the Jeep brand has sold 283,106 sport utes – an increase of 24% over the same term in 2011.

The Dodge brand was mathematically the worst vehicle among the Chrysler Group brands in terms of growth but the important part was that Dodge showed positive growth – unlike a fair sized group of other brands in the industry. The top three models from Dodge in terms of growth were the Journey with an increase of 69% while the Avenger and Caravan tied for second with a 43% increase each. That big jump in minivan sales allowed the Caravan lineup to be the top Dodge model in terms of sales volume with 9,247 units sold. The Journey was second with 7,051 units sold and the mighty Dodge Charger was third with 6,440 units sold (up 21%). It should be noted that the Chrysler Group sold 772 examples of the new 2013 Dodge Dart in its second month of sales and as more Dart sedans reach dealerships around the country, we can expect to see the numbers from the Dodge brand and the Chrysler Group grow with the help of this sexy new compact sedan.