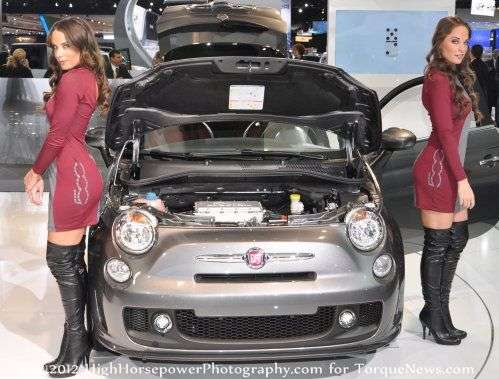 The organizers for the 2012 Los Angeles Auto Show have announced that among the new model debuts at the LA show this year will be the all electric Fiat 500E – giving the Chrysler Group their first electric vehicle and helping them show some support for the EV movement even though Fiat CEO Sergio Marchionne seems less than enthusiastic about the project.
Advertisement

Considering the absurd laws in California that push new car buyers towards electric vehicles it comes as no great surprise that the production level Fiat 500E will make its debut in the City of Angels. The LAAS organizers expect this to be a huge year for electric vehicles as well as hybrids and the Fiat 500E is just one of three new EVs to debut in late November (along with the Ford Focus Electric and another unnamed model).

Unfortunately, the release from the LA Auto Show announcing that the Fiat 500E would make its grand debut did not offer any details on the new compact EV but based on the rumors that have been floating around for the past year or so, we can expect the all-electric Fiat 500 to offer around 100 horsepower. This is a little lower than many of the competitors in the electric vehicle segment with the most popular pure EVs being the 120 horsepower Nissan Leaf and the 143 Ford Focus Electric but when you consider how much smaller the Fiat 500 is than those two EVs – the 500E should be plenty peppy and offer plenty of range with its less powerful drive system. The traditional, gas powered Fiat 500 packs just 101 horsepower and 98lb-ft of torque but is still a blast to drive so an electric version with 100hp (and probably more than 98lb-ft of torque) could likely be one of the more engaging EVs in terms of driving excitement.

This low pricing has a downside as with the high price of the electric drive technology, the Chrysler Group and Fiat will have a very difficult time making any money from the all-electric 500. A great many critics made shocked faces when Ford priced their Focus Electric near $40k and the same was true when GM announced the $41k+ price of the Chevy Volt. These vehicles are priced very high for their segment but this pricing was needed for the companies to make enough money for these models to be worth their time and trouble. Even at $41k, GM is still losing money on the Volt due to the cost of the battery technology and the same will likely be true of the Fiat 500E. For this reason, Sergio Marchionne has voiced his disinterest in producing a pure electric vehicle – instead showing preference for highly efficient gasoline and diesel engines – but the Fiat and Chrysler boss did state that the Fiat brand would have an EV by the end of 2012 in order to meet the rising standards set forth by the EPA. To make enough money to justify the 500E based strictly from a business perspective, the Chrysler Group would likely have to charge so much money that it would drive away their prospective customers so to give the Fiat EV a chance – we can expect to see the 500E with a pricing well below the Ford and Nissan EVs.

The Fiat 500 Electric first showed itself in the US at the 2010 North American International Auto Show in Detroit alongside the Fiat 500 Abarth that was, at that time, a concept. The 500 Abarth has since become a production reality (and a freaking awesome one, at that) and once the 500E debuts in LA, the company will continue to promise on the brand growth planned when Fiat re-launched in the US.

The image above on the right shows the Fiat 500 Electric at the Detroit Auto Show in 2010. While it doesn’t show much of the car – can you complain about any shot with those two stunning models? I know that I cannot.