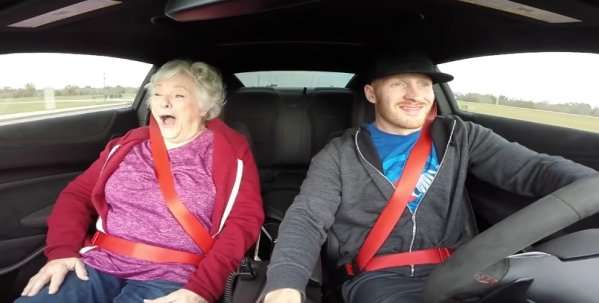 The 2017 Chevrolet Camaro ZL1 that we have featured in a few dyno videos here on TorqueNews.com is back in action, but this time, ZL1 Tommy is taking his 75 year old mother for a high speed ride in his 770 rear wheel horsepower Chevy muscle car.
Advertisement

If you are a Chevrolet Camaro fan who regularly reads TorqueNews, you will likely recognize the 2017 ZL1 in the video below. This new Camaro ZL1, owned by YouTuber ZL1 Tommy, has been featured here a few times while stretching its legs on the dyno – first in stock form when it laid down 554 rear wheel horsepower and then with a mod list that raised the output to 770 rear wheel horsepower.

This time, ZL1 Tommy has mounted the camera inside of his 2017 Camaro so that he can catch the reaction of his 75 year old mother during a high speed thrill ride in his supercharged Chevy, and the resulting videos are pretty funny.

The 770rwhp Camaro ZL1
In case you missed our previous piece talking about ZL1 Tommy’s 2017 Camaro, it is fitted with a set of pulleys, headers, a full exhaust system, a new camshaft, a methanol injection setup and a tune for E85 – all of which allows the supercharged LT4 to send 770 horsepower to the rear wheels. In stock form, the new ZL1 is a beast, but with an extra 200+ rear wheel horsepower, I have to imagine that this Camaro really moves out with some authority.

To offer viewers an example of what it is like to ride in his 770rwhp Camaro ZL1, the owner of this Chevy muscle car took his 75 year old mother for a ride and he made a short video of the fun.

In the first part of the video “mom” gets into the new Camaro ZL1 and makes some of the usual “mom comments” - like how low to the ground the car is and, when the LT4 engine roars to life, she asks if he has some ear plugs.

After a short walk around showing the new Camaro ZL1 from the various angles while also letting us hear the LT4 grumble at idle, the video transitions to the open road. The driver asks his mother if she is ready, he gears down into 2nd and hammers the throttle. The new Camaro springs to life and Tommy’s mother laughs in excitement, making shocked faces as the new ZL1 pulls harder with each shift.

The best part comes towards the end of the video when the mother is laughing about how the new Camaro ZL1 was fishtailing during the early phases of the pull.

Crank up your speakers and enjoy this short video of a 75 year old mom enjoying a ride in her son’s 2017 Camaro ZL1.