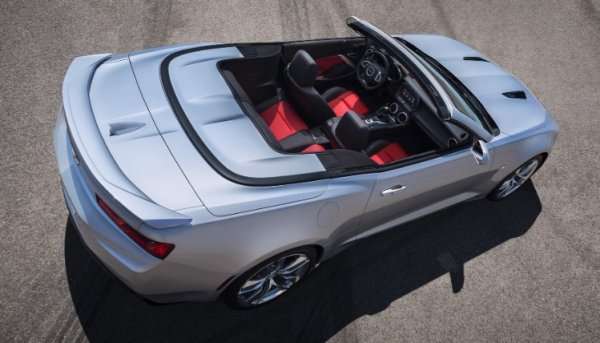 5 Ways the 2016 Camaro Convertible is Better than Ever

General Motors has rolled out the first official information on the 2016 Chevrolet Camaro Convertible and this new drop top has five vital features that make it better than any Camaro Convertible in the past – while also having a distinct advantage over the Ford Mustang Convertible.
Advertisement

Before getting into the aspects of the 2016 Chevrolet Camaro Convertible that make it unique from the previous generation, we should quickly touch on the basics. Like the new Camaro coupe, the convertible will come with the buyer’s choice of three different engines and two transmissions, including the new 2.0L turbocharged 4-cylinder, the revised 3.6L V6, the LT1 V8, a 6-speed manual transmission and an 8-speed automatic transmission.

Of course, the new Camaro Convertible will also have the refined interior and the restyled exterior of all 6th gen models, but in creating the next generation drop top, GM wanted to add features that not only made it unique from past Camaros, but also unique when compared to the Ford Mustang convertible…and they succeeded.

“The 2016 Camaro coupe will set the benchmark for the segment in terms of technology, performance and design,” said Todd Christensen, Camaro marketing manager. “Adding the most sophisticated top in the segment brings another level of refinement – and driving enjoyment – to the Camaro convertible.”

What Makes This Camaro Convertible Special
Like the 6th gen Camaro coupe, the new 2016 Camaro Convertible is totally redesigned, restyled and re-engineered, with some features that we have never seen on an American muscle car in the past.

First up, like the coupe, the 2016 Camaro Convertible is at least 200 pounds lighter than the outgoing models, thanks to a stiffer, lighter chassis that has helped to lighten up the entire lineup. This should make the new Camaro vert lighter than the 5th gen models, with exact power figures coming closer to the beginning of deliveries.

Second, as the Camaro Convertible teaser video predicted, the top will drop or close when traveling at speeds up to 30 miles per hour. This way, say that you are creeping along in slow-moving rush hour traffic, you won’t need to be stationary to put the top down. Also, if you have the top down and a surprise rain shower hits – you can get the top up without having to pull off of the road. This makes enjoying the open air experience even easier and this feature is a rarity in the entire industry while being a segment exclusive for the Camaro.

Third, the 2016 Camaro Convertible has a fully automatic control system that operates the latch system and the actual gearing of the top. With many convertibles, you have to first manually unhook a central latch or a pair of latches on the corner before using the electronic controls to put the top down. With the 2016 Camaro Convertible, there are no latches to fuss with, so it is one-touch controls to put the top up and down. More importantly, drivers won’t need to climb across the cockpit to mess with the passenger’s side latch.

Finally, one of the constant efforts in the auto industry is to make the area where the top stows look nice, and the 2016 Camaro Convertible knocks that out of the park with a hard tonneau that works automatically during opening or closing the top. No need to carry around a piece that snaps in place and prolongs the top up or down transitional period.

What is most interesting about this tonneau cover (which you can check out in the video below), is that it is huge. The reason that surprises me, is that with the new Camaro Convertible being able to drop the top at speeds up to 30 miles per hour, that tonneau has to be facing incredible wind force during operation. However, I think that the design looks amazing in the official images.

Check out the video below showing the 2016 Chevrolet Camaro Convertible in action and stay tuned to TorqueNews.com for all of your top muscle car news!