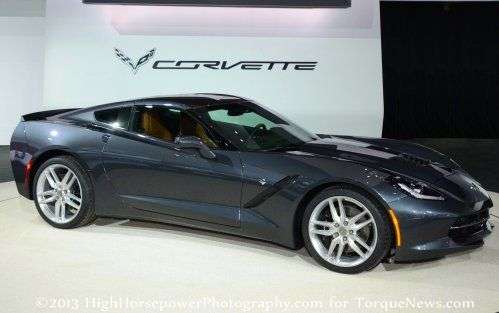 The 5 goals of the 2014 Chevrolet Corvette Stingray design (Video)

General Motors has released a new video detailing the 5 goals of the design process for the 2014 Chevrolet Corvette Stingray and while they aren't laid out quite so clearly in the video – this new piece gives us a look into the key focus points of design for the gorgeous new C7 Corvette.
Advertisement

The new 2014 Chevrolet Corvette Stingray video features Corvette Exterior Design Manager Kirk Bennion. Bennion joined the Corvette design team back in 1986 amidst the 4th generation of the all American sports car and with his years of experience, he was tasked with leading the design team for the C7 Corvette. In the video below, Bennion walks us through the 5 goals of the 2014 Corvette Stingray design team along with a brief discussion on the new Corvette crossed flags emblem at the end of the clip.

As you watch the new 2014 Chevrolet Corvette Stingray exterior design video, you may have a hard time picking out what exactly the 5 goals of the design team were so I’ve taken the liberty of outlining those goals and looking at just how they accomplished those goals.
First, the 2014 Corvette was to have a redesigned top line that would make it unmistakable. Bennion refers to this as the “100 yard away distinction” and with the angular front end, the low roofline and the sleek fastback design that flows into an aggressive rear, the team has most certainly designed a car that is recognizable from a distance.

Next, the 2014 Corvette Stingray was to have a front end that was “a little more serious”. Kirk Bennion explains that they wanted to make the car more seriously looking and not angry. Honestly, I think that it looks a little angry but I find that to be a very appealing attribute. Modern supercars all look like they are ready to strike out and hurt someone – and the Corvette’s front end design fits that theory perfectly in my opinion.

The side cove – the area along the sides of the 2014 Chevrolet Corvette Stingray that are indented a bit starting in the front fenders and running back through the doors – has long been a signature design cue of the Corvette and for the C7, GM wanted the side cove to be bolder and more expressive. Thanks to the vertical size of the new side cove, the addition of the black exposed vents and the sharp angles of the upper and lower body lines, this is definitely the boldest application of the side cove feature through the seven generations of the Corvette.

Next, General Motors wanted the C7 Stingray to have a new sculptural design that had not been seen on previous versions of the Chevrolet Corvette. Through the late part of the C4, the C5 and C6 generations, the Corvette had a basic design layout that was very constant. This obviously wasn’t a bad thing as consumers happily bought up all of those models but much like the drastic change from the C3 to C4 generations – GM wanted a distinct shape for the C7. The result is a 2014 Corvette Stingray that really shares no common shapes with the C6 Corvette with the most prominent differences being the front and rear fascias and the sleek fastback roof design.

Finally, GM wanted the 2014 Chevrolet Corvette Stingray to have a “game changing back end” while featuring new LED taillight technology. The back end has been the most controversial feature on the C7 Stingray due to the departure from the familiar round taillights to the angled, rectangular lenses and there is no question that this sharp, angular rump is the game changer that GM wanted. Even though this rear end design has proven to be controversial among Corvette purists, this design is one that allows the new Corvette to proudly stand side by side with the best sports cars in the world in terms of exterior styling.

The 2014 Chevrolet Corvette Stingray has taken the entire world by storm and even though some older Corvette enthusiasts may turn up their noses at the hard lines and rectangular taillights – there is no question that the C7 Corvette will become a hot commodity when it hits showrooms later this year.