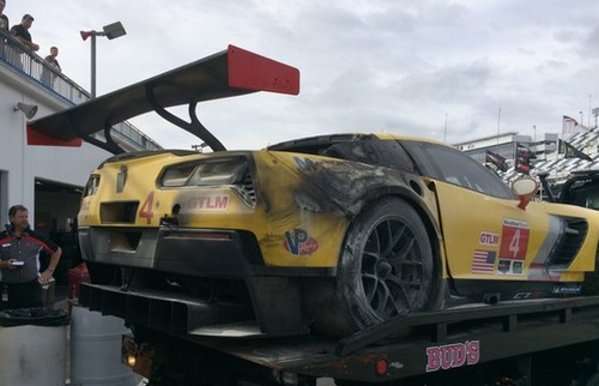 #4 Corvette Bursts into Flames on Track in Daytona

The first practice session for the Roar Before the Rolex 24 kicked off this morning, but the #4 Corvette driven by Tommy Milner didn’t get off to the start that the team had hoped – with the car being carted off of the track on the wrecker after the car burst into flames on the track.
Advertisement

Shortly before noon today, the image above showing the #4 Chevrolet Corvette C7.R all burned up on a rollback wrecker was posted to Twitter by user @GearboxGirl with the title “Smells crispy”. No other information was offered, but this is one of those pictures that is worth a thousand words, as there is no question that the #4 Corvette was fairly seriously burned.

Fortunately, the folks at Corvette Racing are active in the world of social media, so I was able to track down some information on the #4 Corvette, the cause of the fire that knocked it out of the practice session and the fact that driver Tommy Milner is doing fine after the incident.

#4 Corvette Up in Flames
Tommy Milner headed out onto the road course this morning at Daytona International Speedway in the #4 Corvette C7.R with high hopes and in the first half hour of the first practice session of the Roar Before the 24, things were going very well. Milner turned in an early top time for the GTLM class as he battled the damp track, but around 11am, the #4 Corvette rolled to a stop on the “Bus Stop” portion of the track. The field was red flagged as the safety crew battled the fire in the rear of the Corvette C7.R, but once Milner was whisked away to the infield care center and the car was cooled and cleared – the racing action continued without the #4 Corvette.

A short time later, the Corvette Racing team announced that the fire was started when the exhaust system lit the body work on fire. There has been no further information as to what kind of damage has been done to the #4 Corvette, but we know that Tommy Milner was seen and quickly cleared at the Daytona care center.

Milner only completed 16 laps during the practice session, but the #4 Corvette was still the 2nd fastest in the GTLM class – trailing the first place Porsche by less than 3 tenths of a second. Also, the #3 Corvette piloted by Mike Rockenfeller turned in the 4th best time in the GTLM class so even with a serious fire – the Corvette Racing crew is still 2nd and 4th quickest after the first session. With 7 more sessions over the next 3 days, the Corvette team should be able to get the #4 car back on the track for this crucial winter practice event.

Oddly, this wasn’t the only time that the Daytona fire brigade had to help out the Corvette Racing team. Earlier this morning, the firemen had to rush to the Corvette garage area to extinguish a fire on one of their workbenches.