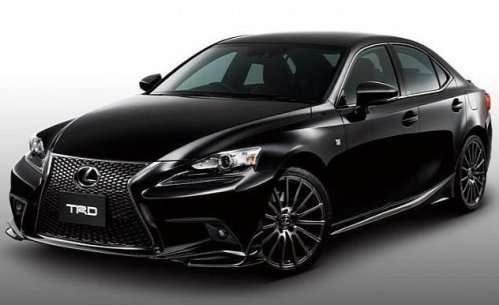 3 ways that TRD has already improved the 2014 Lexus IS

The 2014 Lexus IS is a great looking luxury sport sedan with performance capabilities to match the aggressive looking exterior but the folks at Toyota Racing Development have already offered up a handful of aftermarket components to improve the handling and aerodynamics while also enhancing the looks of this sleek compact 4-door.
Advertisement

The 2014 Lexus IS is unquestionably the most aggressive iteration of the popular Lexus compact sedan since it was introduced back in the late 90s but the folks at Toyota Racing Development (TRD) have taken the sporty design of the new IS lineup one step further while also improving the handling performance in a variety of ways. When fitted up, these new components provide the exterior look of a supercar with handling capabilities that exceed those offered by the high performance F Sport package.

First, TRD has designed a handful of body bits for the 2014 Lexus IS that improve aerodynamics and vastly increase the sporty, aggressive look of the car. This starts up front where new fascia extensions have been added on both lower corners of the IS sedan to both bolster the race ready look while also improving aerodynamics by helping to reduce air turbulence around the wheel openings. Along the sides, the lower skirts have been sharpened to look more like something that you would see on a touring racer, joined by some great looking 19 inch black wheels featuring a bold triple split spoke design. Out back, the lower rear fascia is the most significant improvement of the whole TRD body package with integrated diffusers, unique quad exhaust tips and black trim that reaches much further up the body than the standard lower fascia. This rear fascia really drives home the sporty nature of the new IS sedan with a look that is more supercar than compact sedan. Finally, the TRD body package is capped off by a low profile rear decklid spoiler to adds a touch more sporty style and furthers the aerodynamic enhancements. This body kit (not including the wheels) has an MSRP of 437,700 Japanese yen and at the current exchange rate, that would be around $4,268 US dollars. The 19 inch wheels cost $5,144 (527,625 yen) and while it is unclear – I would guess that price includes tires as well.

Once the appearance and aerodynamic changes made by TRD to the 2014 Lexus IS, the team turned its attention to improving the handling of the new sport sedan. New front and rear stabilizer bars, springs and shock absorbers have been added in place of the standard components. Next, TRD added chassis braces under the front, middle and rear of the IS sedan to stiffen up the chassis thus enhancing hard cornering capabilities. Having had the pleasure of driving the new IS in all of its various configurations including the new F Sport package – I can only imagine how great the new Lexus IS equipped with these TRD suspension and chassis components will handle. The 2014 IS lineup is one of the best handling compact luxury cars I’ve driven in stock form so the Toyota Racing Development should make the new IS a total blast to drive on the road and on the track. This suspension and chassis upgrade package costs $2,815 (288,750 yen), which is really not that hefty of a charge for all of the upgrades and the enhanced performance that they offer. The bad news is that the TRD accessories shown here are currently only being offered in the Japanese market but based on how great the exterior package looks on the blacked out 2014 Lexus IS350 F Sport - I would expect that the American Lexus enthusiast community will be very vocal about these components being offered here in the US. While the wheels (and presumably tires) are an expensive upgrade based on the Japanese pricing, the suspension and chassis improvements seem like a great option for the price and for those new IS owners who want an even more aggressive exterior will likely find that the TRD body package is a small price to pay for the great looking results.

Check out our gallery of the TRD-modified 2014 Lexus IS sedan by clicking any of the thumbnails on this page!