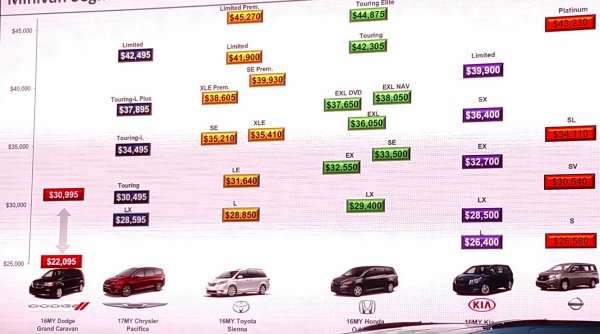 The Chrysler Group has announced the pricing framework for the all-new 2017 Chrysler Pacifica minivan and even with a very long list of standard options, the company that created the minivan is still one of the most affordable throughout the model range – while also offering a great many features that you can't get from any other minivan.
Advertisement

The 2017 Chrysler Pacifica looks to keep the company that invented the minivan at the head of the pack, and it is doing so with a sharp new look and a very long list of standard features - many of which you cannot get from any of the other minivans sold in America. Today, we have the pricing for the new Pacifica and although the newest Chrysler minivan has all sorts luxury features - it still costs less than the key competitors in the segment.

2017 Pacifica Trimline Pricing
The 2017 Chrysler Pacifica will be offered in five basic trimlines when it goes on sale later this year, starting with the LX and continuing up to the Touring, the Touring-L, the Touring-L Plus and the Limited.

The 2017 Pacifica LX starts at $28,595 and this base package includes the Stow N Go seat system, a power driver’s seat, 3 zone climate control, a 5 inch infotainment touchscreen, power windows all around, Bluetooth connectivity, a rear camera system, 17 inch alloy wheels and the 3.6L Pentastar V6 with 287 horsepower mated to a 9-speed automatic transmission.

Next up is the 2017 Pacifica Touring, which starts at $30,495 and includes everything from the LX package while adding satellite radio, power sliding rear doors, passive entry at all doors and automatic headlights.

Starting at $37,895, the Pacifica Touring-L Plus takes the luxury feel a little further, adding the UConnect theater system, a 7 inch driver information center screen, a heated steering wheel, a power front passenger seat, heated second row seats, a larger center console and an 8.4 inch touchscreen with a 13 speaker sound system. This package is really the best option for someone who wants to enjoy all of the tech gadgets available in the new Pacifica from front to rear.

Pacifica Versus the Competition
Starting at $28,595, the 2017 Chrysler Pacifica starts at a lower price point than the Toyota Sienna an the Honda Odyssey, while the Nissan Quest and the Kia Sedona both have lower starting points. Of course, features vary a great deal from model to model, but based strictly on the pricing figures, the Pacifica starts lower than the two other most popular minivans in America.

On the top end of the scale, the Pacifica Limited starting price of $42,495 puts it well below the Toyota Sienna Limited Premium, the Honda Odyssey Touring Elite and the Nissan Quest Platinum – all of which are not available with features like Stow N Go, heated 2nd row seats, the panoramic roof, the 10-inch seatback screen of the UConnect Theater system, and a long list of other goodies that you get in the Pacifica Limited.