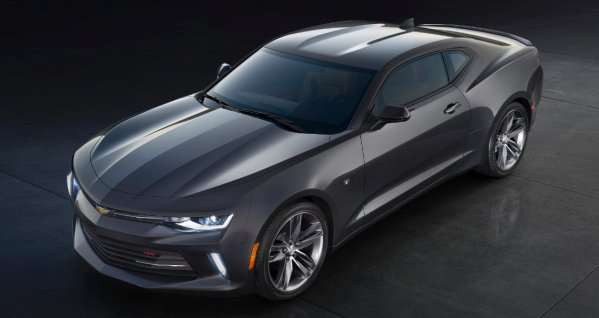 When the 2016 Chevrolet Camaro was introduced last month in Detroit, we learned that the new generation GM muscle car would come with a turbocharged 4-cylinder engine similar to that offered in the 2015 Ford Mustang EcoBoost, but based on the specifications of the Camaro turbo 4, it seems very unlikely that GM will see the same success from their fuel-sipping model as Ford does – at least not in the United States.
Advertisement

When the 2015 Ford Mustang was introduced with the 2.3L EcoBoost engine, the rest of the performance car world was quick to poke fun at the idea of a 4-cylinder muscle car. The Camaro crowd was particularly harsh, but with 310 horsepower and 320lb-ft of torque, the EcoBoost Mustang is still a very solid performance car. When combined with the strong fuel economy ratings, the EcoBoost engine quickly became a popular option with those buyers who wanted a mix of efficiency and performance. In fact, the EcoBoost has grown to be so popular that the most recent sales statement from Ford points out that the 2.3L EcoBoost engine is the bestselling option in the current Mustang lineup in some very large markets.

Based on the popularity of the EcoBoost Mustang, I fully expected to see a turbocharged 4-cylinder 2016 Camaro, especially when considering the fact that the Camaro is based on a similar chassis platform to the Cadillac ATS coupe which also features a stout turbocharged 4-cylinder. However, when the new 2016 Camaro specs were announced, with a turbocharged 4 that only offers 275hp and 295lb-ft of torque, I was shocked that GM hadn’t lifted the output of the 2.0L turbo 4 to better compete with the EcoBoost Mustang.

The Turbocharged 2016 Camaro
Now, before getting further into this, I want to clarify my views on the 2016 Chevrolet Camaro with the turbocharged 2.0L 4-cylinder engine. I think that it is going to sell fairly well in the North American market, where those folks who want the style of the new Camaro with the best fuel economy possible will gladly buy up this new engine option. GM has promised that it will be the most efficient option for 2016 so for those folks who are least worried about performance – this new turbocharged 4-cylinder mill will be an easy choice.

However, the 2015 Ford Mustang EcoBoost has broader appeal, attracting both the buyers who want style and fuel economy as well as those who do care about performance. Not only does the EcoBoost Mustang has a significant power advantage over the turbo Camaro, but it has proven to be a very capable performance engine with very minor upgrades. Of course, the same could very well be true of the Camaro with the turbocharged 4-cylinder, but the Camaro is entering the battle with a disadvantage of 35 horsepower and 25lb-ft of torque. This presents a marketing challenge for GM, as they try to attract those buyers who aren’t set on one car or the other in shopping for a pony car with a good mix of fuel economy and performance. If nothing else, Ford has a very clear advertising edge, boasting more than 300hp while the Camaro does not…and that is the kind of thing that matters to John Q Carbuyer.

This relatively slight difference in power could cause the Camaro’s turbocharged 4 to struggle in the US while the EcoBoost Mustang flourishes, but I think that deep down, GM isn’t really concerned about US sales of the turbo Camaro. The V6 Camaro offers a very comparable level of performance and fuel economy to the EcoBoost so while non-V8 Mustang buyers have flocked to the EcoBoost, non-V8 Camaro buyers in the US are likely to continue leaning towards the V6.

The Turbo 4 Camaro Matters Overseas
While the 2.0L turbo Camaro might struggle to compete with the EcoBoost Mustang on US soil, I believe that the far more important battle will be waged outside of North America. The Camaro has long been available around the world, but only with the V8 engine option and that means that in other parts of the world, the Camaro of the past few years was very expensive to buy and very expensive to feed. GM has not offered the V6 overseas, so there has been no real alternative to allow foreign Camaro fans a more cost effective option when muscle car shopping.

On the other hand, when the 2015 Ford Mustang was introduced on a global level, it was instantly clear that they planned to offer both the Mustang GT and the Mustang EcoBoost all over the world. Like the previous generation Camaro, the Mustang GT will face high prices and big fuel expenses while the 2.3L EcoBoost comes with a lower price tag, fewer penalties for poor fuel economy and less cost in keep it fueled up. That gives Ford a major advantage in the global muscle car war and that is where the turbo 4 Camaro comes into play.

I expect that the 2.0L turbo engine in the 2016 Camaro will be most popular in those markets where gas prices are much higher and where the 3.6L V6 is not offered. Those folks who have wanted to buy a Camaro in Europe or Asia in the past, but who were turned off by the high prices involved with the V8 engine will now have an affordable, efficient engine option that will better suit their needs – just like the EcoBoost has done for the Mustang abroad.

So, while the EcoBoost Mustang continues to grow in popularity over the V6 base model in the US, I expect the V6 Camaro to continue to be the most popular option while European and Chinese buyers will almost certainly line up for the fuel sipping turbo 4 Camaro.