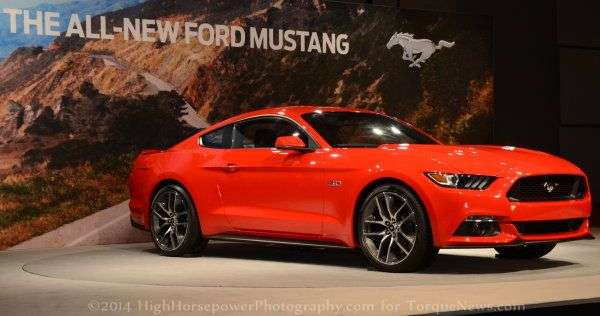 A while back we learned that the 2015 Ford Mustang GT and EcoBoost would each feature a Performance Pack option and thanks to a leaked order form, we have a look at what appears to be a full list of components of each of those go-fast upgrade packages.
Advertisement

When the first screenshots from dealership computers showing option pricing for the 2015 Ford Mustang leaked last month, two of the juiciest bits of information were the Performance Packs for the S550 Mustang in GT and EcoBoost trim. There were no details of those packages available on the dealership screenshots, but we learned that the EcoBoost Performance Pack would cost $1,995 while the Mustang GT Performance Pack added $2,495 to the final price.

Based on past Performance Pack options for the Mustang, we could make some guesses as to what these packages would include but today, we have a look at the full details of these performance pack setups thanks to our friends at Mustang6g.com.

Based on the official order guide for the 2015 Ford Mustang, the Performance Pack will be available for the S550 Mustangs fitted with either the 4-cylinder turbocharged EcoBoost engine or the 5.0L V8-powered GT. Surprisingly, there is no mention of a Performance Pack for the base V6 Mustang, but I would expect to see something arrive for the popular base model in the near future.

Finally, the EcoBoost Performance Pack deletes the rear spoiler… which I really don’t understand. Should this package really only cost $1,995, I would expect it to be quite popular.

Unique to the Mustang GT Performance Pack is a Brembo front brake setup with larger rotors and 6-piston calipers, a front strut tower brace, a K brace, a slightly different interior gauge package with oil pressure and vacuum rather than boost and a 3.73 Torsen rear differential. Like the EcoBoost package, the GT Performance Pack seems like a smokin’ deal – even with the slightly higher price of $2,495.

It should be noted that the pricing referenced here is based on leaked images of dealership order screens for the 2015 Ford Mustang and while that seems like a reliable source – there is no guarantee that those prices are official. However, regardless of the pricing, the Performance Packs for the EcoBoost and GT Mustang should include these exact features when they arrive later this year.