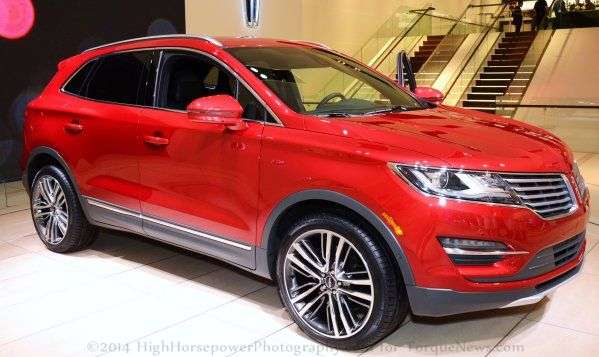 The power figures for the 2015 Ford Mustang EcoBoost haven’t been announced but Ford Motor Company rolled out the official power specs for that same motor in the 2015 Lincoln MKC – giving us a very rough idea of what to expect when the turbocharged Mustang arrives.
Advertisement

When it was officially announced that the 2015 Ford Mustang would include the new 2.3L EcoBoost 4-cylinder as an optional powerplant, the company promised that the Mustang EcoBoost would pack at least 305 horsepower and at least 300lb-ft of torque. Ford hasn’t offered any other power estimates for the new turbocharged Mustang, but we know that the 2015 Lincoln MKC will feature a unique tuned version of that same engine and today Ford dropped the official figures for the 2.3L EcoBoost in SUV duty.

This should make the new MKC quite a spirited drive and very competitive within the segment, but it also gives us our first official power numbers for this new engine. There have been a variety of powerful EcoBoost engines at work in the US for the past few years, but the 2.3L mill that serves as the premium engine in the 2015 MKC and the midlevel engine in the 2015 Mustang is new to the US market. Because of that, we really didn’t have anything to go on when trying to guess how much power the 2015 Mustang EcoBoost would have – but now we do!

The 2015 Lincoln MKC equipped with the 2.3L EcoBoost 4-cylinder engine will offer 285 horsepower at 5,500rpm and 305lb-ft of torque at 2.750rpm. This engine is currently only offered with standard all wheel drive yet it still offers 18 miles per gallon around town and 26 miles per gallon on the highway. This engine should make the new MKC a blast to drive while still offering very strong fuel economy.

The 2015 Ford Mustang EcoBoost is promised to make at least 305 horsepower and at least 300lb-ft of torque. With the unique tune applied to the 2015 Lincoln MKC making 285hp and 305tq, I would expect to see a similar torque advantage with the 2.3L mill featured in the 2015 Mustang. Should Ford rate the Mustang EcoBoost right at 305 horsepower, I would expect to see a torque output in the area of 330lb-ft of torque and should Ford push the horsepower up to 325, torque numbers could reach up around 350lb-ft…although I would be very surprised to see a 40 horsepower differential from the similar EcoBoost engines in the Mustang and MKC.

The 2015 Ford Mustang EcoBoost will have a great many go-fast options such as the EcoBoost Performance Pack, but Ford also plans for this engine to be a fuel economy showstopper. The 2015 Lincoln MKC’s offerings of 18 around town and 26 on the highway are impressive from an all wheel drive crossover, but the numbers should be substantially better from the 2015 Mustang even with quite a bit more power. This powerplant should have no issues offering at least 21mpg around town and 32 on the highway while the aerodynamics of the 2015 Mustang could push that highway number even higher.

The 2015 Ford Mustang is officially on sale now and with the first units expected to hit showrooms later this year, it shouldn’t be long before we get the first official power figures on the engine S550 Mustang lineup.