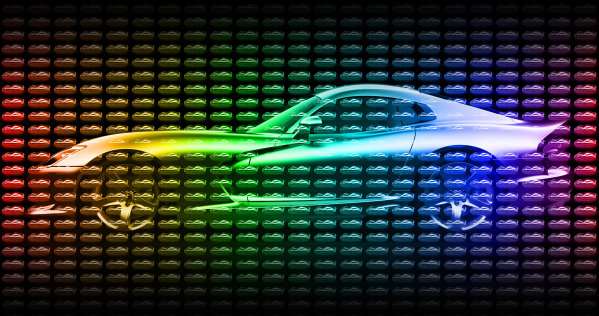 The Chrysler Group has just announced the new 2015 Dodge Viper GTC package and while there are plenty of crucial aspects with this new trimline, none are as enticing as the 8,000 available exterior colors and the 24,000 available stripe packages that combine to create a collection of bespoke, 1-of-1 Mopar supercars – all with a shockingly low price.
Advertisement

The Dodge Viper has always packed the power to keep up with some of the highest performance (and highest priced) cars from all over the world. However, high end exotic brands have long had the bragging rights of being the few companies to offer full customization to their customers. Buyers of cars like the Bugatti Veryon or modern Lamborghini models have the option of a bespoke ordering process that lets them pick from a long list of exterior colors, trim, interior packages and more. This allows buyers to configure their new supercar to the exact specifications, but options like this have always been reserved for cars that cost upwards of a quarter of a million dollars.

With the 2015 Dodge Viper GTC, that all changes, as this new bespoke package brings 25 million different patterns to buyers and it does so without any price increase – bringing this supercar customization to the masses for under $100,000.

The 2015 Dodge Viper GTC
The 2015 Dodge Viper GTC is based on the new Viper GT and it comes with all of the standard content that you get in the GT package. The GT package sits between the base SRT and the higher end GTS, coming with the physical appearance of the base model with the comforts and suspension system of the Viper GTS. Where the new Viper GTS stands apart from the GT is in the customer design and interaction during the build process.

When you put those altogether, buyers have 25,000,000 possible configurations for the new Viper GTC. Once the buyer has selected the chosen exterior design, they are sent a color chip package to confirm that those are the colors that they want. Next, a 1:18 scale Viper speedform (shown below in green) is sent to the buyer with the chosen paint and stripe package added and if that is correct, the owner keeps the speedform and the factory is given the go-ahead with the build. Also, once a buyer has confirmed a specific configuration, that collection of options is locked out so that no other buyer can build that exact same car. This makes each GTC Viper a 1-of-1 vehicle. Next, the 2015 Dodge Viper GTC buyers are privy to the Viper Ambassador Owner's Portal, which allows them to track the progress of their build along with receiving weekly updates on the progress. Also, once the car is completed, a plaque is affixed to the dash with whatever the owner would like, such as the owner’s name, a nickname for the car, etc. It also comes with a blank plate in case the vehicle is sold so that the new owner can also put their own stamp on the car.

The Customizer Should Be Fun
While the customizer for the 2015 Dodge Viper GTC isn’t live yet, when it does fire up, it should be plenty of fun for fans who want to create images of outrageous looking supercars. This configurator will also have a print option that will allow buyers and fans alike a chance to save a high resolution version of their custom Viper to show off to their friends. The 2015 Dodge Viper GTC configurator should be live within the next few weeks and dealers should begin taking orders for these bespoke supercars in February. The Connor Ave plant will begin build these unique Vipers during the second quarter of 2015, so they should be on the road by summer.

Oh, I almost forgot to mention that the 2015 Dodge Viper GTC starts at $94,995 - the same price as the Viper GT. That makes the new Viper GTC the most affordable bespoke car in the world. Wow is right.