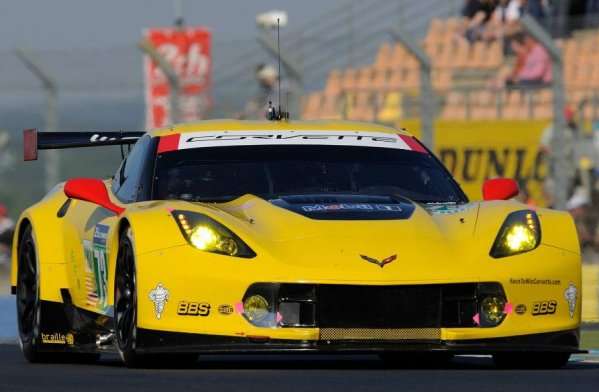 The new Chevrolet Corvette C7.R race cars made their 24 Hours of LeMans debut this past weekend with the hopes of achieving the success of past generation Corvette race cars and while mechanical gremlins prevented the teams from taking the class win – both C7.R teams finished strong in the grueling 24 hour race.
Advertisement

In the world of production based endurance racing, there are few vehicles that have had more success in the past 20 years than Corvette Racing so with the 2014 introduction of the new C7 Corvette C7.R race car, the teams had high hopes of bringing home yet another LeMans class win. The teams headed to LeMans after showing strong success in the past few TUDOR championship races so there was good reason to believe that the new Corvette race cars could win the GTE Pro class.

Both Teams Get a Strong Start
Tackling the driving duties for Corvette Racing at the 2014 24 Hours of LeMans endurance race were Antonio Garcia, Jan Magnussen and Jordan Taylor in the #73 C7.R while Oliver Gavin, Tommy Milner and Richard Westbrook piloted the #74 Corvette. The teams got off to a great start when Jordan Taylor drove the #73 Corvette to the 2nd quickest time in qualifying for the GTE Pro class, starting on the outside of row 15 in 29th place overall. Only the #51 Ferrari 458 Italia turned in a better qualifying time in the class. With Tommy Milner at the wheel, the #74 Corvette turned in the 4th best time in the class, putting that Corvette on the outside of the 16th row in the 31st position overall.

Things looked very good for both of the Corvette C7.R teams in the early portion of the 2014 24 Hours of LeMans race as both cars worked their way to the front of the GTE Pro class. Throughout much of the first half of the race, both Corvette Racing entries fought for the class lead and in most cases, if they weren’t in the top spot they were in the first few spots within the class.

Mechanical Gremlins Strike
Unfortunately, as was the case at both the Rolex 24 at Daytona and the 12 Hours of Sebring, mechanical problems interrupted the strong run by both C7.R Corvette race teams.

Problems struck the #73 Corvette C7.R first during a pit stop when the car’s air jack system failed. Like many endurance cars, the Corvette Racing teams rely on a super fast jacking system that lifts all four tires off of the ground at once. This system operates by putting a high pressure air hose on a valve that is similar in its most basic definition to the valve that allows you to put air in the tires of your daily driver. During a pit stop in the middle portion of the race, that air valve stem failed and prevented the team from servicing the car. The ensuing repairs cost the quicker of the two Corvette teams two laps and while Taylor, Magnussen and Garcia continued to be among the quicker drivers in the class through the latter stages of the race – that stupid valve stem can be blamed for the #73 Corvette not having a better chance of winning the GTE Pro class.

While the #73 Corvette was dealing with the air jack problems and making up the laps lost during the repairs, the #74 Corvette continued to be among the top cars in the class…spending much of the middle portion of the 24 hour long race battling for the class lead. Unfortunately, during the third quarter of the race, driver Oliver Gavin reported to his crew that the low voltage indicator was lighting up and that he had a burning odor in the car. Upon bringing the car into the pits, the crew found that a leak in the cooling system for the gearbox had sprayed some fluid onto the alternator drive belt and that was causing the belt to slip. This slipping caused both the burning smell and the low electrical charge in the Corvette C7.R so the team fixed the leak and the charging issue at the same time – but the damage had been done on the scoreboard. The #74 car lost 8 laps in the pits and was effectively removed from contention for the win.

A Strong Late Run for a Podium Spot
Although mechanical problems knocked both of the Corvette teams down, both crews worked fast to get the cars back on the track as quickly as possible. Fortunately, the #73 Corvette was just as fast after the valve stem issue as it was before the fluky problem so the drivers were able to get back up to within one lap of the leader and finish in the second spot in the GTE Pro class. The #51 Ferrari 458 Italia took the class win in running 339 laps – the #73 Corvette ran 338 laps in the 24 hour race. To get an idea of how much high speed driving that was, the Circuit de la Sarthe track is 8.469 miles long so 338 laps is 2,862.522 miles to finish 14th overall.

The #74 Corvette ran into much more severe mechanical problems which took longer to fix, so the drivers were far too many laps down – too late in the race – to really make a run at the podium. However, they were able to make up some of that ground and finish in a very respectable 4th place in the class and 18th overall in running 333 laps.

A total of 36 cars finished the race and 7 of those cars were in the GTE Pro class. Two GTE Pro cars failed to finish the race, as did 16 other cars across the field. Although Corvette Racing didn’t get the win that they wanted, both cars performed very well and if not for the fluky air valve stem issue, the #73 Corvette would have surely been in the running for the win. Much like Sebring and Rolex, the Corvettes were among the fastest cars in the class before running into mechanical problems. Once the teams have had a chance to work the bugs out of this relatively new race car, we can almost expect to see the Corvette Racing program racking up the wins at these historic endurance races.