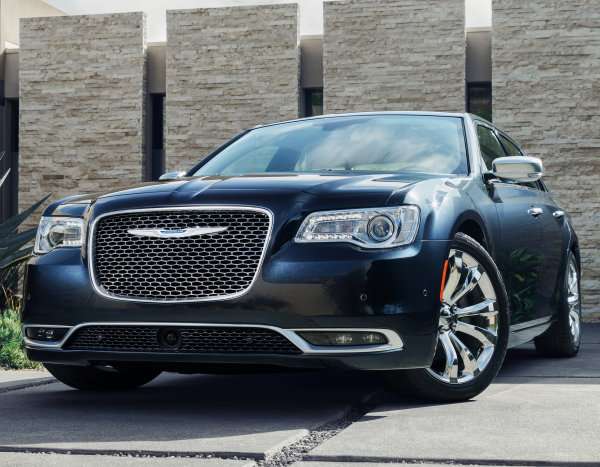 The 2015 Chrysler 300 is currently on display at the 2014 LA Auto Show with a revised exterior, an even more luxurious interior, a new 8-speed transmission, a variety of new high tech goodies and a new super-premium trimline, but what you won’t see in the 2015 300 lineup is a high performance SRT model – at least not in the United States, anyway.
Advertisement

Since before the ill-fated SRT brand existed, the Chrysler Group high performance SRT package had been available on a variety of vehicles over the years ranging from the 4-cylinder Dodge Neon to the supercharged V6 Chrysler Crossfire to the Jeep Grand Cherokee to the Ram 1500. While SRT models came and went over the years, the Chrysler 300, the Dodge Charger and the Dodge Challenger were the SRT constants. That all changes with the introduction of the 2015 Chrysler 300, which features a new exterior design, new interior gadgetry and a new 8-speed transmission for the Hemi models, but with these additions comes the unfortunate demise of the 300 SRT.

The Refreshed 2015 Chrysler 300
Since being introduced 10 years ago, the Chrysler 300 has been billed as a full size luxury sedan with a sporty side, but with the 2015 model year 300, the Chrysler Group is putting more emphasis on luxury and less on sportiness. Up front, the 2015 300 wears a new, bigger grille and a revised lower front fascia with a chrome “Mobius strip” that accents the lower grille opening while the rear end benefits from a new set of LED taillights and a new integrated exhaust tip design. These changes are subtle enough that the average driver won’t be able to notice a 2015 in a crowd of 2014 models, but they are significant enough to a light mid-cycle refresh like this one. On the inside, the 2015 Chrysler 300 features an increased level of luxury, with all of the plush leather and high end accents that you would expect, plus an array of new features including a 7 inch TFT driver information center, a new rotary dial shifter and a new 3-spoke steering wheel with paddle shifters.

Finally, in showing their dedication to the 2015 Chrysler 300 being a premium luxury sedan, a new Platinum trimline has been added. The 300C Platinum features hand qu8ilted Nappa leather seats, a Poltrona Frau leather-wrapped dash and center console, hand sanded wood interior trim, platinum chrome exterior trim and unique 20 inch wheels which, when combined with all of the other standard features, is priced very reasonably at $42,395.

The 2015 Chrysler 300C comes with the 5.7L Hemi V8, the new 8-speed automatic transmission and rear-drive only with 363 horsepower and 394lb-ft of torque. The new 300C offers best in class V8 horsepower, best in class V8 torque and best in class driving range with estimated fuel economy figures of 16mpg around town and 25mpg on the highway. No SRT 300 for the US
What you will not find in the 2015 Chrysler 300 lineup is an SRT variant – at least not for the North American market. As feared by Chrysler fans around the US, the refocusing of the Chrysler Group brands with Dodge being the performance lineup and Chrysler being a luxury lineup has led the company to kill off the SRT package for the new 300 for the North American market. This means that if you are a devout Chrysler Group enthusiast and you want a high performance sedan, your “only choice” will be the Dodge Charger SRT, which is offered in the 483hp SRT 392 form or the incredible 707hp SRT Hellcat trim.

The 2015 Chrysler 300 SRT will be built, just not for the United States or any other North American market. The details are scarce right now, but Chrysler has confirmed that the SRT 300 will live in overseas, particularly in right hand drive markets where the Dodge Charger SRT will not be offered.

Gordon Peterson wrote on February 9, 2015 - 5:03am Permalink
Interested particularly in latest (2015) Chrysler 300S V8 and 300S diesel models, and when they will be available in New Zealand. No mention of them in media or NZ Auto magazines at all yet.