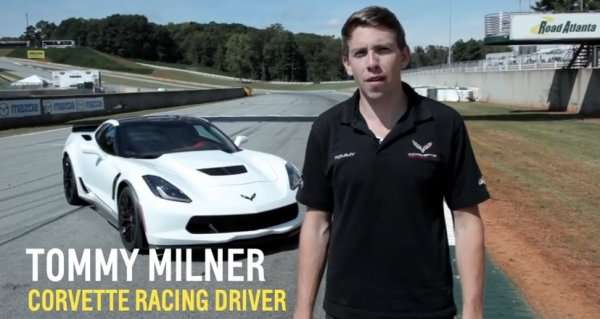 The 2015 Chevrolet Corvette Z06 Coupe is started reaching owners this week and to celebrate the arrival of the most track capable Corvette of all time, GM put Corvette Racing driver Tommy Milner behind the wheel of a new Z06 for a hot lap of Road Atlanta – giving us a chance to see and hear the newest American supercar in action.
Advertisement

The 2015 Chevrolet Corvette Z06 is billed by General Motors as the most track capable Corvette of all time and with a 650 horsepower supercharged engine, the most advanced suspension setup ever offered on a GM production road car, a monster brake setup and a chassis that has been designed to yield the best combination of ride quality and road handling possible – it should really be billed as the best Corvette of all time. In any case, we can expect that the new Corvette Z06 will soon prove itself as the most track capable ever once in the hands of private owners, but to show off the C7 Z06 in action, GM turned to Corvette Racing championship drier Tommy Milner.

Milner is the driver of the #4 Chevrolet Corvette Z06 race car that competes in the Tudor United SportsCar Championship and he has been a part of the championship winning Corvette Racing program for years. There are few people in the world that can wield a Corvette like Milner so it can be argued that he is one of the best choices when picking someone to show off what the new Z06 can do on a road course.

Milner & the Z06 Tackle Road Atlanta
In my opinion, there is no better way to show off track capabilities of the 2015 Chevrolet Corvette Z06 than to have Corvette racer Tommy Milner take to one of America’s most well-known race courses. GM provided Milner with a 2015 Corvette Z06 that had been fitted with the new 8-speed automatic transmission, the high performance Z06 package and the Brembo carbon ceramic brake rotors for use at Road Atlanta and the results were very impressive – as is the sound of the Corvette as Milner rocketed around the 2.54 mile road course.

Using the built in Performance Data Recorder (PDR) system, this video provides a front-facing camera view of the 2015 Corvette Z06 tearing around the track along with an in-car view of Milner driving the new Z06. The PDR system also includes a track map with a car marker so that you can see where on the track the Z06 is at any given point, along with a linear tachometer, a g meter, a gear indicator, a speedometer and a lap timer, which makes this one great video.

How the Z06 Lap Time Stacks Up
We can see in the video that Tommy Milner does a great job of pushing the 2015 Corvette Z06 to its limited at Road Atlanta, but unless you follow the world of road racing, you may not know how good or bad of a lap time 1:29.81 is. Fortunately, we can look at the numbers from the Petit LeMans at Road Atlanta back in October to see that this is indeed an impressive time for a street car.

Tommy Milner and his teammates drove the #4 Corvette Racing Z06 at the Petit LeMans to a 4th place class finish and a 12th place finish overall after qualifying 9th place in class and 27th overall. In qualifying, Milner’s Corvette C7.R race car turned a best lap of 1:19.256, making the race car about 10 seconds quicker around the track than the Z06 road car with street tires. In the slower GTD class, most of the cars were in the 1:22-1:23 range, making the new Z06 only about 6 seconds slower than the group of endurance race cars in the production based Daytona class.

In short, the new Corvette Z06 is only a touch slower than a full blown race car at Road Atlanta, but it has all of the luxuries of a proper road car while still being within a few seconds of race cars including the Porsche 911 GT America, the Ferrari 458 Italia and the Audi R8 LMS…but the Corvette has air condition, a high end sound system, leather seats and everything needed to serve as a very exciting daily driver.

Anyways, enough with the talk – crank up your speakers and scroll down for the video of Tommy Milner piloting the C7 Corvette Z06 around Road Atlanta.