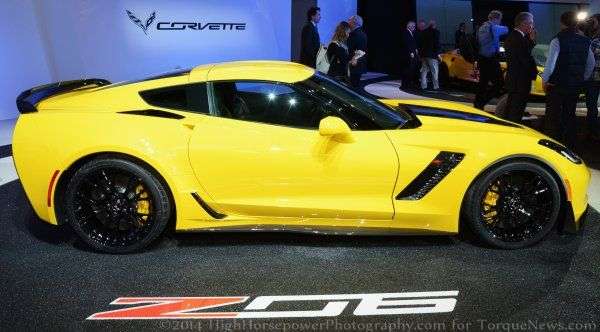 The 2015 Chevrolet Corvette Z06 is the Heaviest Corvette Ever

The 2015 Chevrolet Corvette Z06 is slated as the most track capable Corvette ever and the LT4 V8 is the most powerful Corvette production motor ever, but what we didn’t expect is for the C7 Z06 to be the heaviest Corvette ever…and it is.
Advertisement

General Motors still hasn’t rolled out all of the details on the 2015 Chevrolet Corvette Z06, but thanks to a leaked order guide, we have the most crucial figures that have been left a mystery – the weight.

When GM introduced the 2015 Chevrolet Corvette Z06 at the 2014 North American International Auto Show in Detroit earlier this year, they promised that it would be the most track capable Corvette ever. The company offered up a great deal of information about the high performance brakes, the high tech suspension system, the new automatic transmission, the lightweight chassis and the carbon fiber body components. They even offered up estimated power figures for the all-new supercharged LT4 V8 of 625 horsepower and 635lb-ft of torque – which were later revised to official numbers of 650 horsepower and 650lb-ft of torque.

What they didn’t tell us back in January was how much the C7 Corvette Z06 would weight, but with all of the lightweight body and chassis components it would have to be pretty light, right?

Not only is the 2015 Chevrolet Corvette Z06 not light – it is the heaviest Corvette ever.

2015 Corvette Z06 Curb Weight
According to the online order guide, the 2015 Corvette Z06 coupe tips the scales at a hefty 3,524 pounds. That is 226 pounds more than the 2015 Corvette Stingray coupe that weighs in at 3,298 pounds. The Corvette which was previously the most track capable was the C6 ZR1, which weighed 3,353 according to GM so the new Z06 is 171 pounds heavier than the C6 ZR1. The C6 Z06 weighed 3175 pounds, making the new Z06 325 pounds more than the previous model…along with being heavier than any standard production Corvette in the past 60+ years.

The order guide doesn’t specify which Corvette Z06 transmission is included in these weight figures, but I would imagine that these numbers are for a “standard” model – and the 7-speed manual transmission is standard across the entire lineup.

Power to Weight Ratio is Still Very Good
While the 2015 Chevrolet Corvette Z06 might be the heaviest Vette of all time, it still shouldn’t have any problems offering better performance than any GM sports car in the past. Thanks to the 650 horsepower LT4 V8, the Z06 could offers a power to weight ratio of 5.42 pounds per horsepower. The 2013 Corvette ZR1 had less power but thanks to the big difference in weight, the C6 ZR1 had a better power to weight ratio of 5.26 and in terms of current competition, the Dodge Viper SRT weighs in at 3,354 and with 645 horsepower – the Mopar supercar has the best power to weight ratio of the bunch at 5.2 pounds per horsepower. Just for the sake of reference, the 2015 Corvette Stingray coupe weighs 3,298 pounds and packs 460 horsepower for a ratio of 7.17.

Honestly, I am more than a little surprised that the 2015 Chevrolet Corvette Z06 is so heavy, but even with a slight disadvantage in power to weight ratio, I still expect the new Z06 to become the standard by which all supercars sold in America are compared. The Viper should be able to battle the Z06, but considering that the base C7 Stingray was able to best the V10 Dodge in a variety of tests – the Z06 should be able to claim most real world bragging rights when racing the Viper.