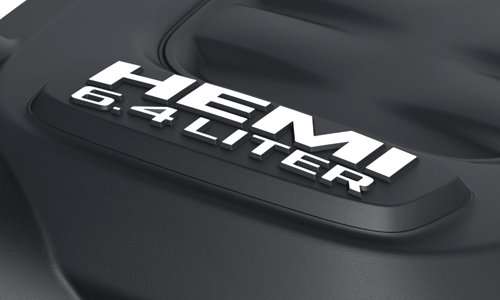 While it had been rumored for quite some time that the 2014 Ram Heavy Duty lineup would soon benefit from a revised version of the 6.4L Hemi V8 from the SRT lineup, the Chrysler Group has announced the official specifications for the new 392 cubic inch heavy duty truck engine – making the 2014 Ram HD lineup the most powerful truck in the class powered by a gasoline engine.
Advertisement

The 2014 Ram Heavy Duty will continue to offer the 5.7L Hemi V8 and the mighty 6.7L Cummins Turbo Diesel inline 6 but new for the 2014 model year is a revised version of the 6.4L Hemi V8 that was previously only used in the high performance Street and Racing Technology (SRT) lineup. This new 6.4L truck Hemi packs 410 horsepower at 5,600rpm and 429lb-ft of torque at 4,000rpm so while the motor has been “detuned’ quite a bit from the 470 horsepower and 470lb-ft of torque enjoyed by Charger, Challenger, Grand Cherokee and Chrysler 300 SRT owners – this motor has been designed specifically for heavy duty truck use. More importantly, 410 horsepower and 429lb-ft of torque makes the 2014 Ram HD the most powerful heavy duty truck available on the market today. The most powerful gasoline engine option for the current Ford Super Duty pickup is the 6.2L V8 with 385hp and 405lb-ft of torque while the most powerful heavy duty GM truck with a gasoline engine offers just 360hp and 380lb-ft of torque. Also, the 6.4L Hemi comes with Chrysler’s fuel saver technology that shuts down half of the cylinders when cruising on the highway so in addition to offering big power – this new 392 cubic inch Hemi should offer solid fuel economy.

While it might seem odd for the Chrysler Group to introduce a new 6.4L Hemi V8 for the Ram HD lineup that “only” offers 27 more horsepower and 29lb-ft more torque – this new engine option affords the Ram brand the bragging rights of offering America’s most powerful gasoline-powered heavy duty truck while also giving prospective truck buyers a more powerful option than the standard 5.7L Hemi. In the past, those Ram HD buyers who wanted or needed a little more power than what was available from the 5.7L V8 had to face the price increase of almost $7,800 that comes with the 6.7L Cummins Turbo Diesel. However, the 6.4L Hemi packs that extra punch with a price increase of just $1,495 over a comparably equipped 2014 Ram HD with the 5.7L Hemi. Also, this new Hemi V8 is the first gasoline engine offered in the Ram 3500 dually trucks – buyers could previously only get the heavy hauling 3500 dual rear wheel trucks with the Cummins Turbo Diesel which drives the price up a great deal. This new engine will help effectively lower the “base” price of the Ram 3500 DRW models by a massive amount and while the 6.4L trucks wont tow as much as the Cummins Rams – not everyone NEEDS the ability to tow 30,000 pounds so those who are looking for less towing capacity and a lower price will surely be attracted to the new 6.4L Hemi powered Ram 3500.

In addition to the new 6.4L Hemi V8, the 2014 Ram HD will offer class exclusive air suspension on both Ram 2500 and Ram 3500 models. The Ram 2500 features an optional air suspension setup in the rear that replaces the standard coil spring setup while the Ram 3500 features supplemental rear air suspension to improve ride quality without hurting towing and hauling abilities.

Production of the 2014 Ram Heavy Duty lineup is slated to begin in the third quarter of 2013 with the first 6.4L Ram pickups likely hitting the dealerships before the end of the 2013 calendar year.