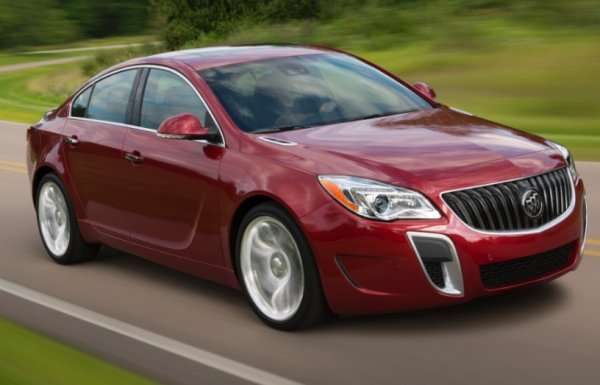 General Motors announced the pricing for the 2014 Buick Regal this morning including the numbers for the new “base” turbo models, the eAssist drivetrain, the “high performance” Regal GS and the new optional all wheel drive setup – with the least expensive 2014 Regal starting at $30,615 with destination.
Advertisement

There are a few bits of very significant information that I should point out before getting into the details of the 2014 Buick Regal pricing.

First off, GM has flip-flopped the engines in terms of “base” and “upgraded”. For the 2013 model year, the 2.4L naturally aspirated 4 cylinder engine with Buick’s eAssist setup was the standard engine and those who cared more about power (and less about fuel economy) had to pay a premium price for the 2.0L turbocharged engine. For 2014, GM has added more power to the 2.0L turbo motor and made it the standard engine choice while the 2.4L eAssist engine is now the optional “upgrade”.

Second, the 2.0L turbo motor that is standard for the 2014 Buck Regal offers more power than the 2013 models with the similar drivetrain, jumping from 220 horsepower and 260lb-ft of torque to 259 horsepower and 295lb-ft of torque. It comes as good news that the standard 2014 Regal drivetrain offers more power than the outgoing “upgraded” models but it comes with some bad news as well. While the Regal GS returns for 2014, it no longer packs a high performance version of the 2.0L turbo motor. Where the 2013 Regal GS offer 270 horsepower and 295lb-ft of torque, the 2014 GS package uses the same engine as the base model Regal although the GS package does still include exclusive performance features like Brembo brakes and an active suspension system.

Finally, all wheel drive is available for the first time on the 2014 Buick Regal and this advanced AWD system is available on the base or GS Regal sedans. This all wheel drive system should make the new Regal much better in the snow while also improving the performance of the Regal GS.

Now onto the pricing.

The 2014 Buick Regal pricing begins at $30,615 and that includes a $925 destination charge. Compared to the 2013 Regal in base form, the 2014 Regal is $705 more expensive than the outgoing entry level Regal but that does include the turbocharged engine that is both more powerful and more efficient. If you want better footing in rough weather conditions or better traction when you’re pushing the midsized sedan to the limits - the 2014 Regal AWD models start at $32,790.

The 2014 Buick Regal GS pricing starts at f $37,830 – an increase of $1,955 over the 2013 model year Regal GS. Considering that the GS lost power for the new model year, I am more than a little surprised that the 2014 GS costs more but at least the torque output is the same and in addition to the new model offering better fuel economy around town and on the highway. Where the 2013 Regal GS hits 19mpg in the city and 27 on the highway, the 2014 models will reach 21 in the city and 30 on the highway so you can make up some of that increased cost at the gas pump. Fortunately, while a 6 speed automatic transmission is standard, buyers can opt for a 6-speed manual transmission for no additional cost.

Those Regal GS buyers who want the best possible driving experience in any condition can opt for the new 2014 GS AWD which comes with the same features as the front wheel drive GS but adds an advanced all wheel drive system with a starting price of $40,195.

The 2014 Buick Regal should begin hitting dealerships around the country in the next few months so if you want to get one of the last 270 horsepower Regal GS sedans from the 2013 model year you might not want to wait much longer.