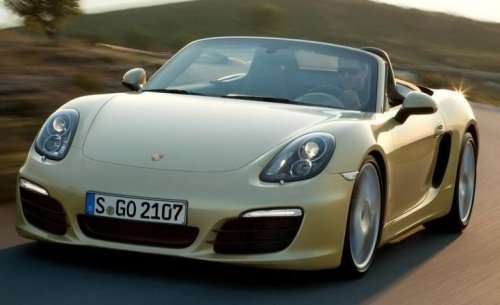 The 2013 Porsche Boxster drops its top in Geneva

While we got the first details on the 2013 Porsche Boxster and Boxster S in January, the new topless made its formal debut at the 2012 Geneva Motor Show with a new chassis, more power, better fuel economy and better overall performance.
Advertisement

The 2013 Porsche Boxster benefits from a refined chassis and a new, lightweight aluminum body that sits on a longer wheelbase with a wider track. There is less “overhang” in front of the front wheels and behind the rear wheels, with this larger track providing a more stable footing for improved handling. Porsche has also equipped the 2013 Boxster and Boxster S with larger wheels and a new electronic power steering system to improving handling and driving dynamics. The result of these construction and design changes is a car that should outperform the previous Boxster while also being 15% more efficient (per European standards).

The 2013 Porsche Boxster sports a new 2.7L Boxer engine with 265 horsepower, 10 more than the 2.9L Boxer engine from the previous entry level Boxster models. When fitted with the standard 6-speed manual transmission, the 2013 Boxster will dash from 0-60 in 5.5 seconds and hit a top speed of 164 miles per hour while those 2013 Boxster models equipped with the 7-speed dual clutch Porsche Doppelkupplung transmission (PDK) will hit 60mph in 5.4 seconds with a top speed of 162 miles per hour. The 0-60 time of the 2013 Boxster with the PDK transmission drops to 5.2 seconds when mated to the Sport Chrono package for those who want improved performance from their new topless Porsche.

The 2013 Porsche Boxster S retains the 3.4L Boxer engine from the previous models but it now packs 5 more horsepower, with a total output of 315 horsepower and 266lb-ft of torque. The 2013 Boxster S equipped with the 6-speed manual transmission will hit 60 from a stop in just 4.8 seconds and with the PDK, the new S will reach 60 in 4.7 seconds. Just like the standard Boxster, the Sport Chrono package cuts the PDK 0-60 time by 2 tenths of a second to just 4.5.

Porsche has not issued official fuel economy ratings for the 2013 Boxster or Boxster S but considering that it is lighter than the 2012 models and 15% more efficient in Europe; we can expect that the new Boxster will offer better fuel economy than outgoing models. The German automaker hasn’t mentioned which transmission will be the more efficient of the two but the company is quick to point out that the advancements in the Porsche Doppelkupplung transmission, allowing the self shifting models to be quicker than the stick shift cars. However, having spent time in a 2012 Boxster S with the 6-speed manual transmission, I would still opt for the gear-banging fun of the manual transmission.

These upgrades come with a price, as the MSRP of the 2013 Porsche Boxster is $1,400 higher than the 2012 models while the 2013 Boxster S starts $2,300 higher than the current production model S. The base model Boxster and Boxster S are the only two models currently planned but based on past generations, we can expect to see a higher performance Boxster Spyder and some limited edition models in the next few years – if it takes that long.

The Boxster has come a long way since being introduced, with the previous generation making great strides to oust the reputation of lacking the required performance of the Porsche brand and with more power coupled with a lightweight construction – the 2013 Porsche Boxster removes any qualms about owning an “entry level” Porsche. At this point, anyone who discredits the Boxster lineup is either spoiled by some higher end sports car like the 911 or they haven’t driven the modern Boxster.

LG's New EV Battery Plant Is a Welcome News for Tesla
Tesla Giga Berlin's New Hurdle: It's Not Only the Gov't, but Now Tesla Itself
END_OF_DOCUMENT_TOKEN_TO_BE_REPLACED