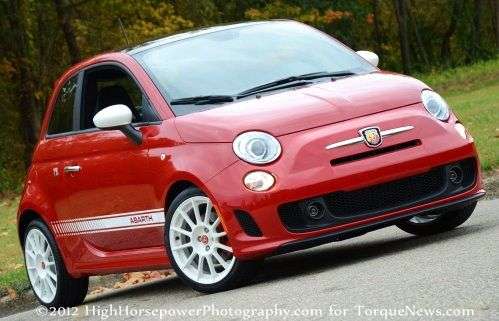 Earlier today, the Fiat USA YouTube account posted a new video showing the 2013 Fiat 500 Abarth Cabrio (convertible) being put to the test by a pair of Ferrari racers while also confirming that this open air high performance 500 will make its debut later this month at the 2012 Los Angeles Auto Show.
Advertisement

There have been no official details offered on the 2013 Fiat 500 Abarth Cabrio but it is widely expected that this open air Fiat performance model will be identical in every way to the fixed top version (shown on the right) shy of the differing rooflines. This means that the Abarth Cabrio will be powered by the same 1.4L MultiAir turbocharged engine that so beautifully provides 160 horsepower and 170lb-ft of torque to the front wheels via a sport tuned 5-speed manual transmission. We can also expect that the Abarth Cabrio will feature very similar (if not identical) suspension and brake system upgrades to those found on the current production 500 Abarth.

Physically, the 2013 Fiat 500 Abarth Cabrio will sport the same aggressive body kit with a larger front fascia opening compared to non-Abarth 500 models as well as a rear diffuser, the lightweight wheels wrapped in high performance tires and unique Abarth decals and scorpion badges. Inside, the Abarth Cabrio will feature the same flat bottomed sport steering wheel, short throw shifter, leather appointments and scorpion logos that the fixed roof models wear. The only real difference should be the addition of the roof control buttons – and the retracting roof, of course.

Convertible Feature of the Fiat 500

For those of you who are unfamiliar with the convertible feature of the new Fiat 500, it does not use a traditional folding top design that most Americans are familiar with – instead opting for a unique “roll top” design. With this, the outer edges of the roof remain fixed in place while the canvas convertible top travels on a set of tracks mounted inside of the roof. The top gathers behind the rear seat, offering all of the open air freedom of a traditional convertible while still offering the stability and chassis rigidity of a hard top model.

This design helps to maintain the safety levels without having to add a ton of weight via door mounted and underbody reinforcements that we see with some convertibles. It is a very cool design that should only serve to make the Abarth lineup more exciting. After all, tearing the roof off will only the occupants to hear more of the sweet, sweet Abarth exhaust – and being that the 500 Abarth has what I considering to be one of the best sounding stock exhaust systems available in the US – that is a very good thing.

To introduce the 2013 Fiat 500 Abarth Cabrio, the folks at Fiat called on Ferrari racers Fernando Alonso and Felipe Massa to put the new convertible model to task on a road course in Austin Texas and the company got video that you can check out below. The video doesn’t really reveal much but it is an exciting, short video that shows these two affordable high performance convertibles in action on a closed circuit while being piloted by some of the world’s best drivers.

Having had the pleasure to drive the Fiat 500 Abarth on both the open road and a closed circuit race track, I believe it to be the most exciting compact car available in the US market and all of that driving excitement with a retractable roof will make the experience even better.

Crank up your speakers and enjoy the 2013 Fiat 500 Abarth Cabrio video below!