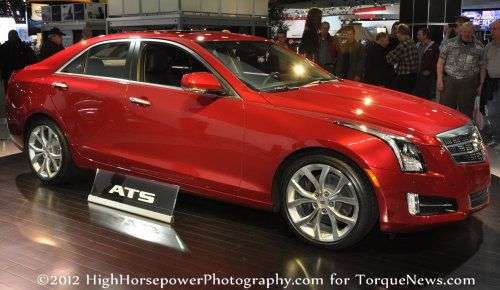 General Motors has just announced the early pricing figures for the upcoming 2013 Cadillac ATS and with a price starting under $34,000 with destination – the new ATS is the most affordable vehicle in the Cadillac lineup while also undercutting the uber popular BMW 3 Series by over $1,800.
Advertisement

The 2013 Cadillac ATS compact sport sedan, when powered by the standard 2.5L with a six-speed automatic transmission, carries a starting price of $33,990. Details are limited right now but GM stated that the entry level ATS will offer “well over” 30 miles per gallon on the highway. This model would compete with the entry level BMW 328i, which carries a price of $35,795 including destination. This package is expected to offer less power than the 328i but with a curb weight under 3,400lbs, the ATS will be lighter than the BMW 3 Series, or other vehicles in the class like the Audi A4 and the Mercedes Benz C250.

Those who want a little more punch out of their 2013 Cadillac ATS can opt for the turbocharged 2.0L engine which churns out 270 horsepower for $35,795 - the exact same price out the door as the entry level BMW 328i. While there is no indication as to what kind of fuel economy we can expect from the 2.0L turbocharged drivetrain, with 270 horsepower this package will be more powerful than the BMW 328i for the same amount of money. The 2.0L turbo engine will be available with a manual transmission in addition to the 6-speed auto as well as the buyer’s choice of rear or all wheel drive.

Those who want even more punch out of their 2013 Cadillac ATS can step up to the 3.6L V6 engine that offers 320 horsepower – 20 more than the BMW 335i – for a starting price of $42,090. The official torque figure hasn’t been stated but the 3.6L engine in the current CTS sedan offers 318 horsepower and 275lb-ft of torque – so production figures for the ATS should be somewhere in that range. This includes a standard 6-speed automatic transmission and rear wheel drive, although all wheel drive is optional for the range topping models with the 3.6L V6. These models also come equipped with the Cadillac CUE infotainment system and 8 way power leather seats with memory. GM claims that this drivetrain package will allow the 2013 ATS to dash from 0 to 60 miles per hour in under six seconds. The heavier and less powerful BMW 335i hits 60 in 5.4 seconds so we can expect similar figures (if not better) from the ATS. That comparable BMW comes with a starting price of $43,295 – making the more powerful ATS over a thousand dollars less expensive.

“The ATS enters a vehicle segment this year that’s one of the most competitive in the market, from both a price and performance standpoint,” said Don Butler, vice president of Cadillac Marketing. “ATS will bring a distinctive presence and compelling value while offering quick, nimble, fun-to-drive dynamics that will appeal to the lifestyles of modern luxury buyers and challenge the segment’s status quo.”

Aside from besting the competition in terms of price and performance, the 2013 Cadillac ATS should entice new buyers to the brand with an entry price lower than any other vehicle in the GM luxury lineup. Right now, the least expensive vehicle in the Cadillac lineup is the popular CTS Sedan, which starts at $36,810 with the $895 destination fee. When the Cadillac ATS hits the market later this year, younger buyers will have a chance to climb into a very well equipped compact Cadillac 3-Series-fighter for just under $34,000 – significantly less than the larger CTS Sedan.

The 2013 Cadillac ATS will be built in General Motors’ Lansing Grand River Assembly Plant where more than 440 new workers have already begun preparation for the start of ATS production. GM will eventually add a total of around 600 workers in conjunction with the $190 million investment in the plant for ATS production.

We can expect full details on the 2013 Cadillac ATS including full power output and fuel economy figures once we get closer to the showroom debut of the new compact Caddy sedan.