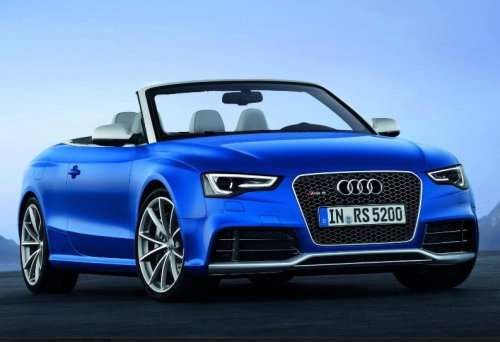 Audi dropped the details on their newest droptop high performance model back in early September but among the public debuts at the ongoing 2012 Paris Motor Show is the 2013 Audi RS5 Cabriolet – including performance figures, fuel economy numbers and the first official pricing for the new topless midsized 2-door.
Advertisement

The 2013 Audi RS5 Cabriolet is powered by the familiar 4.2L FSI V8 producing an impressive 450 horsepower at 8,250rpm (wow!) and 317lb-ft of torque available from 4,000 to 6,000rpm. The 2013 RS5 features an Audi Quattro all wheel drive system that uses torque vectoring, a crown gear center differential and a sport rear differential to send power to all four wheels all of the time for optimal traction in any condition. The standard power split of the new RS5 Cabrio sends 40 percent of the power to the front wheels and 60 percent to the rear but the system can adjust to send as much as 70 percent of the power to the front wheels or 85 percent to the rear wheels depending on what is needed in the various driving situations. Connecting the 450 horsepower V8 to the advanced Quattro AWD system is a 7-speed S tronic dual clutch automatic transmission that delivers lightning quick shifts with the flick of the paddles mounted on the sport steering wheel.

This drivetrain allows the 2013 Audi RS5 Cabriolet to dash from 0 to 62 miles per hour in just 4.9 seconds en route to a standard 155 miles per hour top speed – although for an additional charge the speed governor can be altered to allow the RS5 Cabrio to reach 174 miles per hour. Also, thanks to fuel saving items including the specially geared 7-speed dual clutch transmission, the electromechanical power steering system and the general efficiencies of the RS5 engine and platform, this high performance convertible offers “real world fuel economy” of 25.9 miles per gallon (presumably based on the European test cycle – American numbers may vary).

When cruising the 2013 Audi RS5 Cabriolet offers the ability to lower the convertible top in just 15 seconds at speeds up to 31 miles per hour while putting the top back up (still at speeds up to 31mph) takes just 17 seconds. The sleek soft top folds up to occupy very little of the trunk’s cargo space and when the top is up, the RS Cabrio is almost as quiet inside as the RS5 coupe.

In addition to packing a high performance engine, transmission and all wheel drive system, the 2013 Audi RS5 Cabriolet features a sport tuned suspension system that improves handling and allows the RS5 Cabrio to sit almost a full inch lower than the basic A5 Cabrio. This has been achieved by adding specially tuned five link front and trapezoidal-link rear suspension system featuring lightweight aluminum components plus stiffer mounts and larger anti roll bars. The RS5 Cabrio also featured ventilated brake discs with 8-piston calipers and high performance pads that work with 19” lightweight wheels to get the car stopped as fast as it gets moving.

Those who want more performance from the new 2013 Audi RS5 Cabriolet can opt for goodies like carbon ceramic brakes, Dynamic Ride Control, dynamic steering and a sport exhaust system are available for an additional fee.

The 2013 Audi RS5 Cabriolet is expected to arrive in the United States during the first quarter of 2013 and while pricing has not yet been offered – we can expect it to be somewhere north of the $70,000 price demanded by the hardtop RS5. The RS5 Cabrio is expected to start at 88,500 Euros which, at the current exchange rates, would be around $115,000 US dollars but I would expect it to be closer to the high 70s or low 80k range when it hits the US.

You can look closer at the2013 Audi RS5 Cabriolet in the gallery on the right by clicking any of the thumbnails.