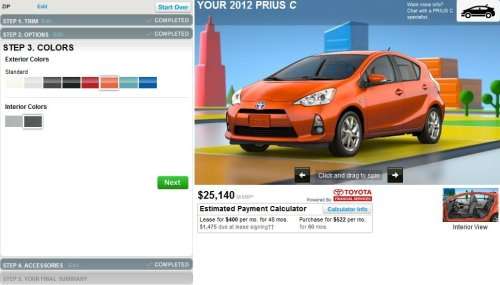 The “build your own” option for the 2012 Toyota Prius C is live on the website of the massive Japanese automaker – allowing hopeful owners a chance to configure the compact hybrid to their liking and see just how expensive (or in this case, how inexpensive) their ideal Prius C will be.
Advertisement

When the initial details for the 2012 Toyota Prius C were introduced the biggest news was the price, with an MSRP starting at just $19,710 for the entry level models (including a $760 destination fee) – meaning that the actual price of the new compact Toyota hybrid was just $18,950. With a starting price under $19,000, the Prius C stands to offer American consumers one of the least expensive hybrids on the market backed by years of successful Toyota hybrid experience. Now that the new configurator site for the 2012 Prius C is live, consumers can see what they get for their money and what the extra “bells and buzzers” will cost.

When configuring the 2012 Toyota Prius C, you can basically skip through all of the options and you come with a straight MSRP of $19,710, as promised. For this price, you get a Prius C One (the trimlines for the Prius C are One, Two, Three and Four) with the standard 1.5L gas electric hybrid drivetrain and the only options you get to pick from is the exterior color as there are no upgrade packages with the Prius C One and this base model trimline comes with Gray Fabric interior on the inside with steel wheels and hubcaps on the outside. The Prius C is available in Moonglow (off white), Classic Silver Metallic, Magnetic Gray Metallic, Black Sand Pearl, Absolutely Red, Habanero (my favorite), Summer Rain Metallic and Blue Streak Metallic. You can, however, pick from a variety goodies like wheel locks, paint protection film, floormats and a $29 first aid kit.

If you step up to the 2012 Toyota Prius C Two trimline, you get an addition exterior color choice in the form of Super White and the standard interior trim is a Light Blue Gray and Black Fabric. In addition to the different interior and extra paint choice, the Prius C Two adds intermittent front and rear wipers, a six speaker stereo system, a 60/40 rear seat, cruise control, audio controls on the steering wheel and front passenger “Advanced Whiplash-Injury-Lessening seats”. This package starts at $20,660 and includes all of the features of the Prius C One along with offering all of the same dealership-added items like floormats and paint protection film. Oh, and let’s not forget the $29 first aid kit.

The 2012 Toyota Prius C Three adds some high tech gadgetry, including door handles with a touch sensor to lock and unlock the doors, automatic climate control, a large audio display with navigation, Toyota’s Smart Key system and push button start. The Prius C Three is the first trimline to offer upgrade packages, with an $850 package that adds a power moonroof and for $390, buyers can opt for a set of 15” aluminum alloy wheels. Interestingly, while the Prius C Three comes with the same Light Blue Gray and Black Fabric inside, buyers cannot pick the Super White exterior from the C Two. The Prius C Three carries a starting price of $22,395 but picking the alloy wheels and the moonroof will drive the price up around $23,635. We also have to wonder how long it will be before a Star Wars loving Prius owner buys one of these new compact hybrids and gets the custom tag “C3PO”.

Finally, the top of the line for the new compact hybrid is the 2012 Toyota Prius C Four. This trimline builds on the features of the C Three, adding power exterior mirrors with built in turn signal indicators, fog lights, 15” alloy wheels and heated front seats. The only option package for the Prius C Four is the alloy wheel package, which removes the standard 15” alloy wheels for a set of sportier 8-spoke, 16” alloy rims for $1,150. The Prius C Four has the same 8 color options as the One and Three trimlines (again, no Super White here) but buyers can pick from either Light Blue Gray or Black “Softex” synthetic leather interior surfaces. Oddly, the moonroof option isn’t listed for the top of the line models and it is not mentioned in the “compare” section that details the changes from one trimline to the next so either the moonroof isn’t available on the top of the line models or it just hasn’t been added to the configurator page yet. The base price for the Prius C Four is $23,990 but if you pick the alloy wheel package and every single dealership accessory, the absolutely, completely loaded 2012 Prius C Four will cost you $26,827.

The 2012 Toyota Prius C could have a massive impact on the hybrid market in the US, with such a low price even for models that are heavily equipped with add-ons. As the price of gasoline continues to rise, the demand for hybrid vehicles grows and not everyone can (or wants to) foot the hefty price of some of the larger, popular hybrids models on the market today.