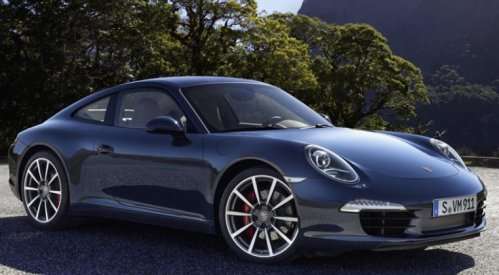 The 2012 Porsche 911 is billed by the German automaker as possibly being the greatest in the storied history of the 911 family and it was announced earlier this week that the revised 2012 911 coupe is now available at dealerships around the United States.
Advertisement

The 2012 Porsche 911 is currently available in two trimlines for American buyers – the 911 Carrera and the 911 Carrera S. As time goes on, we can expect other models like the all wheel drive Carrera 4, the Carrera GTS, the 911 Targa and the high performance 911 Turbo to reach US dealerships. We can also expect the recently debuted droptop versions of all of the 911 packages but for the time being, Americans who have been yearning for the new 911 can sink their teeth into the first two trimlines.

The 2012 Porsche 911 revisions begin on the outside, with the new model being longer, lower, wider and 100 pounds lighter than the outgoing 911 design – leading the German automaker to state that the 2012 911 is “the perfect blend of modern design, intelligent engineering and performance DNA.” Detlev von Platen, President and CEO of Porsche North American had this to say about the introduction of the 2012 911 in the US: "Whether this will be a customer's first or just their latest Porsche 911, it's going to be the most invigorating ownership experience yet. The 911 Carrera and Carrera S are the ultimate choices for drivers who want the fun and excitement of a true benchmark-setting sports car week in and week out, not just for show or play during the weekends."

The 2012 Porsche Carrera serves as the base model, and in addition to the internal and exterior changes for the new model year, the entry level 911 receives a new 3.4L Boxer engine that offers 350 horsepower and 287lb-ft of torque. This engine comes mated to a standard 7-speed close ratio manual transmission that works with the new Boxer engine to help the 2012 911 Carrera to move from a stop to 60 miles per hour in just 4.6 seconds. Those who want a little more performance out of their “base model” 2012 911 can opt for the self shifting Porsche Doppelkupplung automatic transmission that allows the Carrera to dash from 0-60 in just 4.4 seconds and when equipped with the $1,850 Sports Chrono Package Plus package that adds goodies like launch control and more aggressive throttle tuning via the “Sport Plus” button – the 0-60 time drops to 4.2 seconds while also reaching a top speed of 178 miles per hour. The 2012 Porsche 911 Carrera carries a starting price of $83,050 (including the $950 destination fee).

The higher performance package currently available for American buyers is the 2012 Porsche 911 Carrera S. This package begins with a new 3.8L Boxer engine that churns out 400 horsepower (15 more hp than the previous model) and 325lb-ft of torque, which when mated to the standard 7-speed manual transmission allows the 2012 911 Carrera S to reach 60 miles per hour in just 4.2 seconds while hitting a top speed of 188 miles per hour. Buyers who pick the Porsche Doppelkupplung automatic transmission for the 2012 Carrera S will see the 0-60 time drop to just 4.1 seconds or 3.9 seconds when equipped with the Sports Chrono Package Plus package. The 2012 Porsche 911 Carrera S pricing starts at $97,350 with the $950 destination fee.

In addition to the new look and improved performance, the 2012 Porsche 911 Carrera and Carrera S have plenty of options that allow for an impressive level of customization. If you have a hundred grand laying around and are thirsting for a new German sports car – head out to your nearest Porsche dealership for a look at the new 911 for yourself but if you are a few pennies short and would like to configure your dream 911 without the pressure of actually buying one, check out the elaborate 2012 911 configurator on the Porsche website by clicking here.