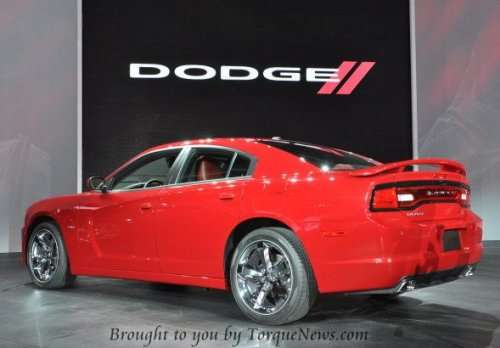 The folks from Dodge haven’t had much to show off at recent auto shows but with the start of the 2010 Los Angeles Auto Show, the “Dodge cars brand” rolled out a handful of new models ranging from high performance muscle cars to vastly refined utility vehicles.
Advertisement

While Ralph Gilles introduced a handful of new or refreshed models for 2011, the top attractions from Dodge’s 2010 LA Auto Show display were the 2011 Dodge Charger and the 2011 Dodge Durango. The Charger receives a substantial refresh inside and out, along with the addition of a new, more powerful entry-level V6. The interior fit and finish of the 2011 Charger gives the modern muscle sedan a far more luxurious feel with new front and rear seats, and the new one-piece dash removes the plastic-heavy reputation of the outgoing Charger. Most importantly, the 2011 Dodge Charger receives exterior improvements to make this car one of the sportiest, most sinister looking performance sedans available in the American market.

The 2011 Dodge Durango comes with a familiar name, although this new SUV is working to shed the negative reputation of the previous generation of Dodge’s well known SUV. Unlike prior Durango’s, the 2011 model uses a unibody construction for better handling and ride quality but it does so without losing the towing and offroading capacity of the older, body-on-frame Durango.

Using the chassis of the 2011 Jeep Grand Cherokee, the 2011 Durango is slightly larger but thanks to the attention paid to the suspension components, the new Durango handles like no SUV I’ve ever driven before. Like the Charger (and the rest of the Dodge lineup), the 2011 Durango offers the new Pentastar V6 and for those who want more punch from their new Dodge SUV, the 5.7L Hemi packs 360 horsepower and Dodge’s fuel saver technology to improve efficiency in the powerful V8.