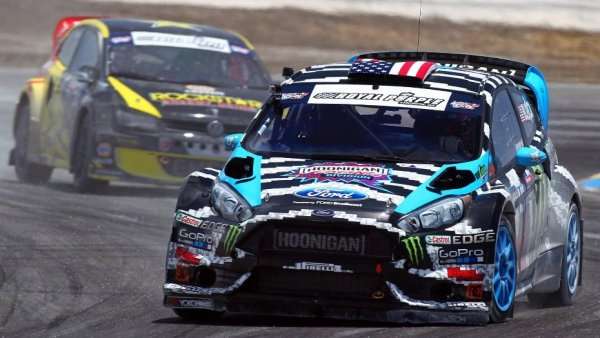 This weekend marks the second stop for the 2014 Red Bull Global RallyCross season with a lengthy list of 19 drivers preparing to duke it out for the gold medal at the summer X Games in Austin Texas – with several popular GRC drivers making their only planned start of the season.
Advertisement

This Saturday at 1:30pm EST, the racers of the Red Bull Global RallyCross series will take to the track for their second event of the season. As has been the case for many Global RallyCross races over the past four years, this event will be part of the Summer X Games and with this being the biggest stage for the world of extreme sports, the second event of the 2014 GRC will have one of the biggest lineups in the history of the series with 19 drivers taking to the track in Texas. Including the 13 drivers who competed in Barbados, this weekend’s X Games GRC race will feature 6 familiar names that weren’t a part of the Top Gear Festival.

In addition to the big crowd, the track sounds like it will cater to some exciting X Games RX racing. The Track is less than a half mile long and with 53% pavement and 47% dirt, there should be a nice mix of speed and grit so it won’t favor any specific drivers.

First up, we have the two Volkswagen Polo entries from Andretti Rallycross with Tanner Foust and Scott Speed handling the driving duties. After seeing Speed dominate in Barbados, the Andretti team is definitely one to watch at the X Games. The Andretti VWs are joined by two other Polo rally cars from Marklund Motorsport with previous GRC champ Topi Heikkinen and Anton Marklund at the helm. The Austin X Games is the only Red Bull Global RallyCross race which Heikkinen and Marklund with compete in due to their heavy involvement in the FIA World RallyCross series.

Next up, we have eight different drivers who will pilot a Ford Fiesta ST rallycar at the Austin X Games. Including in that group are familiar names like Steve Arpin, Nelson Piquet Jr, Patrik Sandell, Brian Deegan and Ken Block along with series newcomers Austin Dyne, Joni Wiiman and Ricky Johnson.

The Subaru Rally Team is the third biggest group behind Ford and VW, with three team drivers piloting the Subaru WRX STI rallycars. Bucky Laser and Sverre Isachsen will return for their second race of the season while Travis Pastrana will compete in his only Global RallyCross event of the season after jumping from Dodge last year to Subaru this season.

From Rhys Millen Racing there will be two Hyundai Veloster rallycars competing in Austin this weekend with Rhys Millen and Emma Gilmour handling the driving duties.

Liam Doran will also compete at the X Games in his familiar Monster Energy Citroen DS3. This is the only event in which Doran will compete this year and although he had a pretty strong showing in the few races in which he raced last season – those were in his previous Mini Cooper rallycar.

Finally, Pat Moro will race in Austin in his Chevrolet Sonic rallycar. Moro competed in a few races last season with little success but he is back for another try this year for an unspecified number of events. I am guessing that if Moro does well in the new Chevy rallycar, he will compete a bit more this season.

The Red Bull Global RallyCross is scheduled to air on Saturday at 1:30pm EST on ESPN and then at 2:00pm EST on ABC.