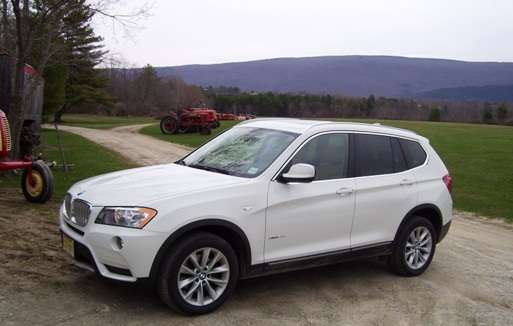 In 2004 BMW introduced a small, premium Sports Activity Vehicle with all-road capability and typical BMW driving dynamics. That first generation BMW X3 was a big hit and became a best seller in the BMW lineup with 150,000 sold in the USA. The 2011, second generation BMW X3 builds on the success of the original by combining new technologies that improve agility, efficiency and comfort.
Advertisement

The driver orientated cockpit features an asymmetrically designed center console. The central display of the navigation system with fourth generation BMW iDrive is integrated into the instrument panel. The system features an 8.8-inch high-resolution trans-reflective screen.

The raised seating position provides good outward visibility and the three rear seats offer sufficient comfort for travelling long distances and significantly more leg and elbow room than its predecessor. With EU-measured cargo volume between 19 and 56.6 cu.ft, the luggage compartment is the largest in its segment and there are plenty of storage compartments, trays and cup holders.

The entry-level X3 xDrive28i features BMW’s N52 magnesium/aluminum 3.0-liter inline-6. Its magnesium/aluminum construction, Valvetronic variable valve lift and Double-VANOS are features found only on BMW engines.
The N52 in the X3 is rated at 240 horsepower at 6,600 rpm and 221 lb-ft of torque between 2,600 and 3,000 rpm. That’s good enough to accelerate from 0 -60 mph in 6.7 seconds, nearly a half-second quicker than the previous X3 xDrive30i equipped with an automatic transmission.

As the top-of-the-line model, the X3 xDrive35i features BMW’s newest turbocharged 3.0-liter inline-6 “N55” engine. It combines direct fuel injection, twin-scroll turbo technology and Valvetronic. The N55 engine develops a maximum output of 300 hp at 5,800 rpm, with peak torque of 300 lb-ft available all the way from 1,200–5,000 rpm. Redline is 7,000 rpm. This engine enables the X3 xDrive35i to sprint from 0 to 60mph in just 5.5 seconds. Top speed is electronically limited to 150mph when equipped with the optional Sport Package.

Compared to the 6-speed automatic offered previously, the 8-speed has “taller” cruising gears that make a significant contribution to reduced fuel consumption and emissions, as well as quietness. Its wider spread of ratios from lowest to highest gear makes
the steps between adjacent gears smaller for a smoother flow of power during acceleration.

Faster shifts are a further benefit because only one clutch pack is disengaged to shift up or down by one or two gears. On the other hand, downshifting more than two gears is accomplished as a direct shift. For example, a downshift from 8th to 2nd gear is made with only one clutch pack disengagement, and thus occurs without stepping down through the intermediate gears. So, at one instant the driver can be enjoying the quiet, fuel-efficient low rpm of 8th gear, and in the next instant getting maximum acceleration.

The 2011 BMW X3 features standard xDrive intelligent all-wheel drive. Now in its third generation, the new system marks a significant evolution in xDrive capabilities, which has always depended upon a networking of Dynamic Stability Control and the xDrive system. With the overall Integrated Chassis Management system, all three control circuits work in parallel. This refined interaction reacts even quicker to changing driving conditions and enhances xDrive’s already good handling dynamics.

BMW xDrive is unique in design and construction. Normally, driving torque is transmitted to all four wheels. Normal torque split is 40% front/60% rear. The portion of torque transmitted to the front wheels is controlled by a multi-disc clutch that can be fully open (100% to the rear), fully engaged or at any level of partial engagement in between. Engagement pressure on the multi-disc clutch is directed by an electronic control system in response to actual road and driving conditions.

The X3’s optional Electronic Damping Control adjusts the shock absorbers to any level of firmness, quickly adapting to road conditions and the driver’s demands. Suspension control is always optimum for current road conditions, vehicle speed, and load. The shocks default to the softest appropriate setting for the vehicle’s speed, and when the vehicle encounters an irregular road surface, they adjust instantly to control ride motions and maintain ride comfort.

The system is so fast that even at highway speeds the system can sense a pothole at a front wheel and adjust rear-wheel damping before it reaches the same pothole. The Electronic Damping Control option includes a new Performance Control feature.

Performance Control helps the X3 maintain a neutral handling character by adjusting the xDrive torque split to 20% front/80% rear in steady state cornering. Performance Control can also apply the inside rear brake while also applying a little more power to the outside wheel (to compensate for the additional drag of the brake) in order to help rotate the vehicle.

Next to the E-Shift lever on the X3’s center console is the optional Driving Dynamics Control selector (included with EDC). DDC provides three settings that tailor vehicle characteristics to different drivers, one driver’s different moods, driving conditions – or all of the above. The settings are Normal, Sport and Sport Plus; the following vehicle-dynamics parameters are affected:

The X3’s driving dynamics can be widely controlled by these different calibrations of so many elements. In addition, when equipped with the Navigation system, the driver may use iDrive to custom-tailor the Sport setting.

Just ahead of the Driving Dynamics Control switch is the Dynamic Stability Control switch for BMW’s stability- and traction-control system. A brief push on this button switches the system to Dynamic Traction Control, in which DSC’s intervention threshold is raised; one effect of this setting is improved traction in deep snow. A long push on the same button de-activates DSC altogether, though the anti-lock braking and anti-rollover functions always remain active.

The new BMW X3 is produced at the BMW Spartanburg, South Carolina plant. With the production of the BMW X5 and BMW X6 models, the location, has become the competence center for BMW X models within the BMW Group’s worldwide production network. Thanks to a comprehensive $750 million expansion, BMW Plant Spartanburg is ready to produce the new X3 for distribution around the world.