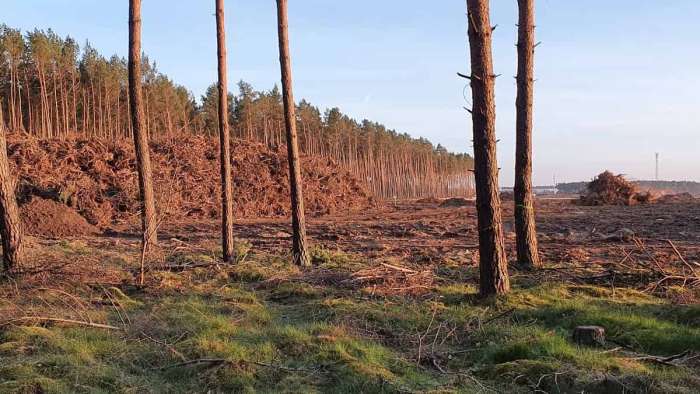 Past Stasi Secrets Are Hidden in the Tesla Forest

All building sites are potentially rich sources of industrial or social history, and none more so, than the 300Ha forest site at Grünheide that will soon be home to Tesla’s Giga Berlin.
Advertisement

Something pricked my imagination – here in the plantation that was once behind the iron curtain was a large pile of rubble. Surely there must be a story! You have seen that pile of the rubble in my previous video updates from Tesla Giga Berlin and even in one of them I said that the decision has been made according to which that rubble must go by April.

The Tesla rubble pile is situated on the western side of the Giga Berlin’s construction site and abuts the A10 Autobahn. I had read several theories about this rubble – like an unfinished bridge ramp – which seemed unlikely as there is a footpath bridge that crosses the A10 just a few hundred meters to the north. Armed with my basic German and Google, the incredible story of what once was on the Tesla Giga Berlin’s construction site came to light – thanks to news program Brandenburg Aktuell broadcast on local TV station RBB24 on February 3rd of this year.

After WW2, Germany was divided into the GDR (East Germany) and DBR (West Germany), and Berlin was split down the middle by the Berlin wall. The fall of the Berlin wall in 1989 saw the reunification of Germany and subsequently the gradual expansion of the EU eastward to include many other countries previously “behind the iron curtain."

The 1950s were the beginning of an era of state control in East Germany and the Stasi, the secret police organization, was responsible for domestic political surveillance in order to preserve the Communist regime. Mail was intercepted, phones bugged and even private conversations in homes listened to by a massive network of informants.

Thanks to recent detective work by local homeland association member and Grünheide resident Uhlrich Kohlman and his colleagues, many Stasi activities were found to be centered on land around Freienbrink that nowadays includes the Tesla Gigafactory’s construction site. In fact, during the days of the GDR, the Freienbrink exit from Autobahn A10 to the L38, which forms the southern border of the Tesla’s Giga Berlin site, was not accessible to normal GDR drivers. A contemporary map from 1985 shows that neither the Freienbrink exit nor L38 road between the A10 and L23 in the east, officially existed.

Was MsF the largest employer in Grünheide?

The Ministry for State Security (MfS), or Stasi as it was known, was probably the biggest employer in Grünheide. More than 500 people are estimated to have worked in the top-secret infrastructure that was out of bounds for most GDR citizens. It’s understood that most worked for “Postal Contro.l” A large hall was used for intercepting and reading private mail, whilst parcels arriving from West Germany were looted and the contents sold-off. Further secret properties were used for the storage of military goods and the personal belongings of departed GDR citizens.

There’s tangible evidence of the Stasi past in the train track that loop down through the Tesla forest to what is now the Freienbrink logistics center. Aerial views from Google Earth also show the remains of a settlement to the east side of the train tracks, said to have been made up of seven bungalows with underground garages, workshops, and fifty person canteens. Contemporary witnesses recount that this settlement was used for terrorist training, explosives training and the like. Unfortunately, nothing more is known, and those who once worked there prefer not to discuss the details.

The end of an era.

As the wall came down the Stasi tried to destroy as many of the 5.6 million secret files they had on their own population as possible. Many were shredded, some were burned and at Grünheide, chimneys became blocked with paper as the Stasi frantically tried to destroy their records.

The urge to forget an unfortunate era of history led local authorities to demolish the settlements in 1990, and to plant the current plantation before the possible repurposing of the settlement could be considered.

Who knows what the excavation of the rubble pile may unearth?

In the meantime, Tesla is moving forward with the Giga Berlin construction.

Andy Granger is a freelance writer and automotive expert with over forty years of experience in the industry. He currently divides his time between Perth, Australia and the Solomon Islands.