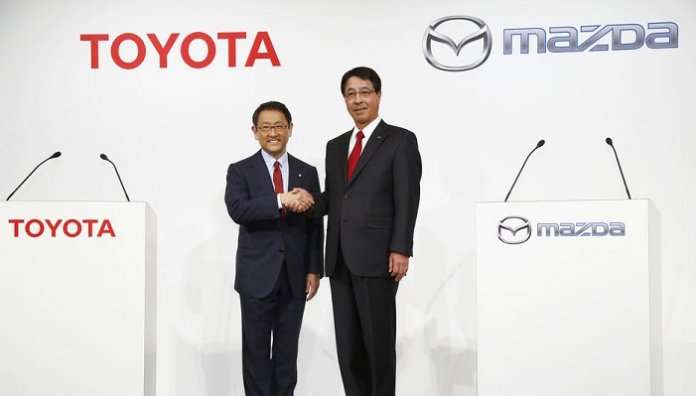 Which States Are Running for the Toyota-Mazda 1.6 Billion Plant with 4,000 Jobs

As you may have already heard Toyota and Mazda will build a 1.6 billion dollar assembly plant in the United States, which will create 4,000 jobs. Here is a short list of states that run to host the plant.
Advertisement

Who wouldn't want to host such a big auto assembly plant from a company like Toyota or Mazda. After all, not only would such a plant bring huge tax revenues, but also would create expected 4,000 high paying jobs in that particular location.

I did a quick search and saw list of newspapers reporting how their states hope to be the location for the Toyota-Mazda plant.

Iowa is one of them. Toyota is considering Iowa and 10 other states for its new joint factory with Mazda, The Wall Street Journal reported. Iowa has already reached out to Toyota. "Brenna Smith, a spokeswoman for Iowa Gov. Kim Reynolds, said the Iowa Economic Development Authority has been in touch with Toyota 'to share the benefits of an Iowa location with them,'" reports The Des Moines Register.

Rochelle in Illinois is another hopefully. "Our plan has always been to expand it to its boundaries, and so, our thoughts were, back about a year ago, let's get a thousand acres of a new area ready and prepare the acres there, so whenever a project like this comes up, Rochelle is ready; and Rochelle is ready," says Rochelle Economic Development Director, Jason Anderson to 23WIFR.

AL.com refers to analysts who say Alabama has a good chance for the plant. The state already hosts 3 automotive plants and has an established supply chain network. "Employment in the automotive sector tops 57,000, with 25,000 jobs in the automotive supplier chains among more than 160 companies. In addition to Mercedes-Benz, Honda and Hyundai, Toyota already has an engine plant in Huntsville. Mazda has not made vehicles in the U.S. for about a decade. Toyota says it will build the Corolla, the world's most popular sedan, while Mazda will focus on crossovers. The plant could produce about 300,000 cars a year," reports the newspaper.

Indiana is also trying to land the Toyota-Mazda plant, reports WishTV.com. It's one of the Midwestern states trying to be the chosen place for the factory.

My state North Carolina is on the short list as well. "The southeast has become the preferred location for many foreign manufacturers because of business-friendly labor laws in many of the region’s states. North Carolina is now the only state in the southeast without a plant. Some experts say the Piedmont Triad has the perfect spot for one at the Greensboro-Randolph Megasite," reports Fox8.

Kentucky is working on the governor's level to bring the plant to the state. "Kentucky Gov. Matt Bevin announced his intention early this week to seek to bring a major new employer to a neighboring county that could have a significant impact on Nelson County’s job market," reports The Kentucky Standard.

Mississippi also has good chances. It already hosts the Corolla factory and has established supply chain. "We do have supply lines in the U.S. that are pretty extensive, particularly for the Corolla," said Scott Vazin, a Toyota spokesman. "We hope these supply lines can be utilized for this new entity, because there are clearly some efficiencies in it," reports Nola.com.

Texas is another state hoping to lure the Toyota-Mazda plant. Its low taxes, light regulation and legal reforms may attract the company to choose Texas.

Georgia has a "decent" shot for the plant, reports 11alive. "Georgia is an ideal location for automotive manufacturing, as we have seen not only with the Kia plant in West Georgia but the hundreds of automotive suppliers that are located in the state," said Stefanie Paupeck Harper, spokesperson for the Georgia Department of Economic Development. "Automotive companies will not find another state that has a better combination of logistics, workforce, quality of life and proven record of success than Georgia."

Here are the 11 States shortlisted for the Toyota-Mazda plant.

Where would you like to see the plant built? I live in North Carolina and my state would be my first choice.