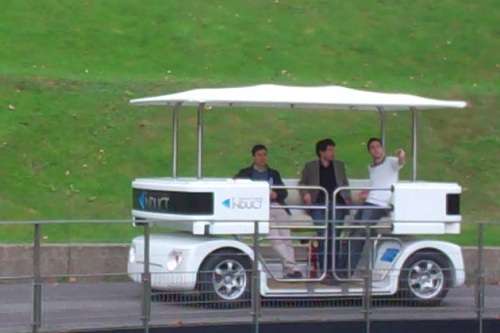 Unmanned car Cybergo can be called by a phone or internet

A French company has introduced a new unmanned car Cybergo. This driverless car is small and responds to a phone call.
Advertisement

Cybergo, presented by Induct, looks like a golf car and can accommodate eight passengers. This smart car has no steering wheel. Three sensors and GPS navigation run the car on its own once the destination address is inputted on the touch screen.

Trajectory, slope, presence of people or objects on the road, everything is detected by sensor and managed by computer. The Cybergo has no driver, but it limits the risks: the maximum speed is 15.53 mph.

The advantage of this small and short-distance vehicle is that it's all robotic. It can move around while "alone." It can be called by a mobile phone or via the internet.

The French company Cybergo has done some studies and found out that there are bus and shuttle routes where the 40-seat buses drive mostly empty. Now this new robotic and 100 percent electric transportation can handle this problem eliminating the need to move a 40-seat bus to transport three people.

However, Cybergo is not a transportation for tomorrow. The French law prohibits any vehicle moving on the roads without a driver. For the near future, this unmanned vehicle will be used on large private sites requiring several trips. these will be businesses that are spread over a large terrain: airports, golf courses, etc...

In fact a British nuclear research center, based in Laval, Mayenne, has already placed the first order for Cybergo. The robotic car will be sold starting December 2011.