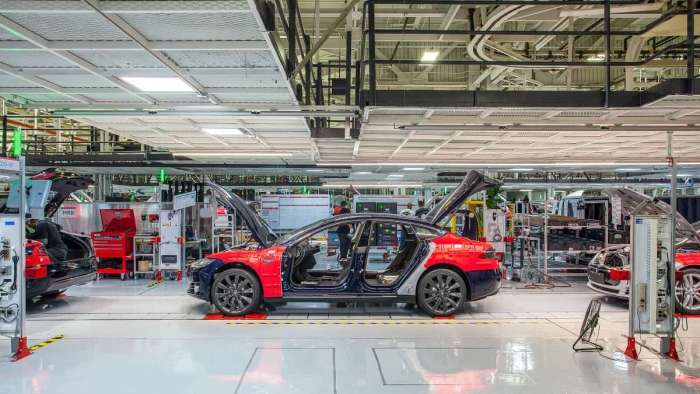 Tesla Has Become Volkswagen's Benchmark In The Automotive Industry

Tesla's financial victory, the entry into S&P 500, marks the success of its model combining electric vehicle and IT development. And the world's number one car manufacturer Volkswagen's boss, has unveiled a vast investment plan to draw inspiration from his "small" American competitor.
Advertisement

Tesla keeps shaking up the world of the automotive industry. The high-end electric car maker, whose stock market value continues to rise, will soon make its entry into the S&P 500, the flagship index of US financial markets. And it is a sensational entry that Tesla will make! With nearly 570 billion dollars in market capitalization, it will be placed directly in the top 10 of the largest companies in the index.

This news stock market is symptomatic of Tesla's upward journey. The market value of the electric "pure player" is at much higher levels than its automotive competitors, which are also starting to get annoyed. According to the usual criterion for calculating the success of a manufacturer, namely the count of its annual vehicle sales, Tesla is indeed only a very small player. The brand only sells around 400,000 cars per year when Volkswagen, world number one, sells 10.9 million and its dolphin Toyota 10.7 million. Akio Toyoda, CEO of Toyota and grandson of the founder, also pointed that out during the presentation of the latest quarterly results: the Japanese manufacturer is less well valued on the stock market, but he sells more cars and earns profits.

This year Tesla plans to achieve a goal of selling and delivery 500,000 vehicles. But now Tesla leads the industry sales forecast with 132% QoQ change.

More pragmatic, Herbert Diess, the CEO of Volkswagen, has chosen to make Tesla his new benchmark. In an interview with Bloomberg, he explains that Tesla is a very important competitor as it pulls the industry forward.“ Coming from the software industry, Tesla has capabilities that we still have to build. It's a benchmark for us,” says Herbert Diess. Volkswagen therefore intends to progress, and progress quickly, in Tesla's two areas of predilection: electric propulsion and on-board software. A real industrial challenge for this historic manufacturer, all of whose capacities revolve around the development of the thermal engine. But also an image challenge, the recent history of Volkswagen still being marred by the Dieselgate scandal, from which VW is slowly recovering.

"It is therefore from the very industrial model of Tesla that Volkswagen wants to be inspired. Tesla has mastered the alliance between electric propulsion, battery production and the development of in-house software that runs everything and allows regular updates to improve vehicle operation. And it is this model which is valued by investors and which threatens other manufacturers with obsolescence," writes Arnaud Dumas in Novethic.

In Bloomberg interview, Herbert Diess confirms this, saying, "We have to make a decision: do we become suppliers of a shell, a body style that is then fitted with a computer by a third party to run the car, or are we able to convert this valuable and exciting object into a real connected object?"

I think Tesla is becoming a benchmark not only for Volkswagen, but also for a host of automotive makers in the global car industry. However, not every CEO will publicly admit it. In any case, shifting the global industry from gas to electric is great for our environment and we all win.