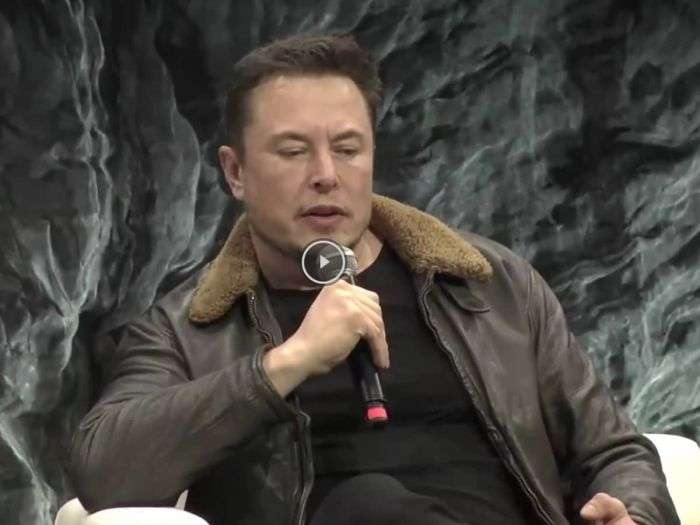 It was a surprise appearance by Tesla boss Musk at the SXSW digital conference in Austin. The billionaire talked about his near bankruptcy and warned against artificial intelligence explaining why AI is more dangerous than the nuclear weapons.
Advertisement

Within an hour, the 3,500 seats were awarded to the 70,000 participants. Among them Andre from Switzerland, university lecturer. "I drive Tesla myself, I'm excited about its innovative power and I hope for ideas about what our future could look like," Andre told BR 24.

Musk entered the stage almost half an hour late. To the music of "My Little Buttercup" he gave a small dance performance.

Base camp on Mars

Cowboy boots, black jeans and leather jacket - Musk is not the classic CEO of a car company. Many Americans love the 46-year-old Tesla boss. His favorite topic: The colonization of Mars. "We will set up a base camp with a power plant and glass domes on Mars, where we can grow vegetables, everything that is fundamental to survive."

In a few years' time, Musk wants to fly the first humans to Mars with the Falcon rocket from its space company Space X. He would wish for the planet a direct democracy as a form of government where everyone could vote immediately.

That's how Musk thrilled the audience in Austin. He also looked back. Christmas 2008 has been the most difficult time for his two companies so far - the rocket company Space X and the car company Tesla. "I had between $30 million and $40 million left, and I had to decide if I'd put the money in one of the companies, and then the other would go bankrupt - or split it up between the two, with the risk that both companies would go bankrupt. Blood, sweat and tears are connected to both companies. They are like a child to me," said Tesla CEO.

But that did not happen. The fourth test rocket of Space X took off successfully and Musk could be sure of the orders of NASA. And also the then new electric cars arrived at the customers.

Warning about an artificial intelligence

But one topic does not let the CEO from Silicon Valley sleep at night: it's AI - artificial intelligence . "Remember my words," says Musk: artificial intelligence is much more dangerous than nuclear weapons. As an example Musk called the program of Google. Their computer learned to play chess with KI within hours and beat every grandmaster. The technology seduces them to become independent and man loses control. "It scares me. The rate at which AI evolves is exponential." He is not a friend of regulation: but here it is necessary, said Musk. The technology is a threat to the people.

After a good hour and thunderous applause, accompanied by a small vocal insert, the Tesla boss then left the stage.

What are your thoughts on these topics? I am also very concerned about the rise of AI. Please, let us know your thoughts and opinions in the comments section below for discussion.