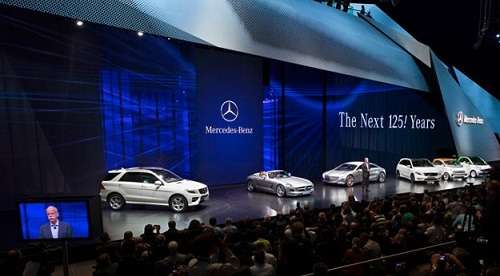 New Infiniti to be built on Mercedes-Benz Architecture on 2014

Infiniti is getting a second breath as Daimler and Nissan will cooperate to build a new model by 2014, it was announced at the 2011 Frankfurt Auto Show by Renault-Nissan CEO.
Advertisement

It seems that Daimler will be expanding its current cooperation with Nissan. As Nissan's CEO Carlos Ghosn announced on the outskirts of the 2011 Frankfut Motor Show (IAA), the company and Daimler will build a new compact Infiniti premium car based on Mercedes-Benz architecture.

The new Infinit will be built outside of Japan, due to the strong Japanese currency. However, the CEO did not specify where it will be build. In fact, it is not yet decided if the new Infiniti will be built in Europe, China or the United states. The extremely strong Yen, has kept the Japanese auto makers worried about exporting cars from Japan. Renault-Nissan's CEO Carlos Ghosn also said that eventually it is conceivable that Renault may also use the architecture of Mercees-Benz.

Daimler and Renault-Nissan first announced about their desire to cooperate during the 2011 spring. The companies have always stressed their desire to further co-operate making their working-together far-reaching. Nissan, Renault and Daimler already cooperate with others in small cars, electric vehicles, light trucks and engines. The potential for cooperation is huge. Already Renaul-Nissan and Mercedes-Benz cooperate in the area of supply of three-and four -cylinder engines.

Renault-Nissan's CEO Ghosn was sitting next to Daimler's CEO Dieter Zetsche at a news conference at the Frankfurt auto show (click to see full coverage of the 64th International Motor Show) when they announced their plans for small compact cars effecting not only Infiniti. Here is the deal. Renault-Nissan will supply small engines for Mercedes cars. While the German luxury car producer will provide larger engines for Infiniti cars. This will help both companies to tap on each other's production capacity and provide higher volumes and cut the cost. Mercedes has bigger engines and will provide it for Infiniti. Nissan has small engines and will provide it for Smart cars. The first Mercedes architecture-based Infiniti is expected to come out in 2014.

for use in Mercedes vehicles, while Mercedes will provide larger engines for Infiniti cars. The idea is to fully exploit each side's production capacity with higher volumes, a practice that cuts costs.

Daimler's CEO Dieter Zetsche said the partnership with Renault-Nissan has developed better than expected, since the start of 2011. However, he said there are currently no plans to increase his company's stake in Renault-Nissan.