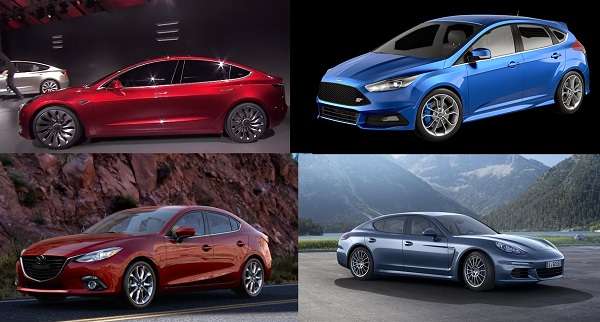 Let's say you are talking to a person who has never seen Tesla Model 3 and he asks you how Model 3 design. What would you respond? Tesla enthusiasts think Model 3 resembles these ICE cars.
Advertisement

Some people think that the design of Tesla Model 3 looks sort of like Ford Focus. They are not identical, but in some broad brush strokes they seem similar. This is why I used a Ford Focus with Model 3 for the image to accompany this story. What do you think?

Model 3 Resembles Porsche
Others think the front design of Tesla Model 3 takes its cue from Porsche and Aston Martin. There are some similarities in the headlights area with Porsche. Some people went as far as saying headlights are 100 percent Porsche. Someone said his initial thought was that Model 3 looks similar to Porsche 911 when he saw it the first time.

"My first thought was the front looked like a Porsche Panamera and the side/back like a BMW 3 series," wrote one person. One person in one of the forums even said that Model 3 has so many reservations because it looks like Porsche. I am not sure it's the deciding factor, but resemblance to Porsche make this lower-priced EV from Tesla more appealing.

Model 3 Resembles Mazda
"The head designer was originally from Mazda and you can see some cues from that as well," wrote one person in Tesla's Model 3 forum.Others say that many parts of the Model 3 are very close to Mazda 3. I can see why people say Mazda 3, but Model 3 looks bigger all around.

Views from Front, Side and Behind
"When viewed from the front and above at certain angles, there appears to be an homage to Porsche/Ferrari. But that could also be seen as a nod to Lotus and thereby the original Tesla Roadster as well.

"Seen from behind... Well, there are gazillions of vehicles that look like this today. I believe that aerodynamics simply lead to a particular solution. There's not really a way around it.

"In side views, there are two cars that the Model 3 reminds me of most. The 2005 Toyota Celica, and today's Hyundai Elantra. And it still doesn't actually look like either of them," writes a user named Red Sage in Tesla's Forum.

What are your thoughts? Do you think Tesla Model 3 design looks like any of these cars? If yes, in what ways?