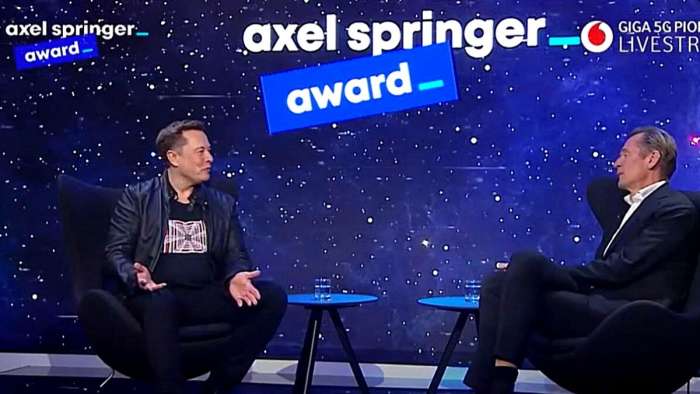 Tesla CEO Elon Musk says he is a big fun of Germany, has lots of friends there, that's why he chose Germany as the location of Tesla's first European Gigafactory known as Giga Berlin. In fact, tonight he is sleeping in the conference room of the Giga Berlin and explains why.
Advertisement

Elon Musk is in Berlin today. This year's Axel Springer award honors Musk for his inventive and innovative spirit. Elon is personally accepting the award at the Axel Springer headquarters in Berlin.

In an interview with Springer CEO Mathias Döpfner, Elon Musk revealed why he is building his Gigafactory in Berlin.

“I'm a big fan of Germany, I have a lot of friends here, I like Berlin. It is a good location for singles as well as families," said Musk.

Asked if Musk plans to spend more time in Berlin himself and even partly live there, Elon responded "Yes, I will be spending a lot of time here."

Where do you sleep tonight? asked Döpfner.

"Tonight, in the factory."

Döpfner - "In the factory?"

Musk - "Technically in the conference room."

Döpfner wanted further clarification. "You sleep in the conference room of the not-finished factory tonight?"

"Yea, I assume so," replied Musk with a big laugh.

As I reported about Tesla being an open to a merger with a rival carmaker, Musk was also asked about the possibility of buying a German car manufacturer.

Elon actually did not rule out that either. He said, "no, if someone wants to come up to us, maybe. We definitely will not attempt a hostile takeover."

Musk, among other things, also spoke about his biggest fear.

Watch the full interview below.