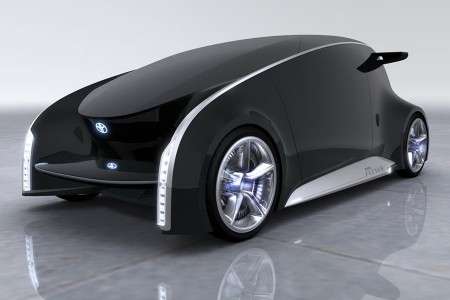 One of the Toyota representatives recently said that there will be no more boring Toyota models and the newly unveiled Fun-Vii concept, to be shown at 2011 Tokyo Auto Show, just comes to confirm that.
Advertisement

When Tokyo Auto Show Opens its doors on Wednesday for the press days, Toyota will be the undisputed leader there as the German car makers were the leaders at the recent motor show in Frankfurt. Toyota, which will champion its newly revealed GT 86, will also have something very fun on the side: the Fun-Vii.

The Fun-Vii, is perhaps the first fully customizable car, the body of which is like a smartphone screen. No wonder it's already dubbed as smartphone car. "We thought it would be fun to put a smartphone on four wheels. The idea led to Fun-Vii," said Toyota Motor Corporation's President Akio Toyoda unveiling the concept as a future way of inter-connectivity. In fact, it will do more than just driving and stopping. An auto pilot capability, an on-board system - helping with traffic direction - and even an en route shopping, are also envisioned. Yet, Toyota declined to reveal when these features will be available.

Fun-Vii is enabled to express the driver's personality. The body, which is a screen, can show any type of information, depending on the driver's desires and preferences, including stock prices. The car can connect to the outside infrastructure that surrounds it. According to Toyota, some of the functions of the Fun-Vii can be controlled through a smartphone or other mobile devices connected to the internet.

Aesthetically, the Fun-Vii has a surprising design, with its original lines well-rounded. It has three seats.

Toyota believes that a car must appeal to our emotions. "If it's not fun, it's not a car," said Toyoda, when showing the car to the group of people gathered at the show room.

The Japanese car maker named it Fun-Vii tapping the keyword "fun" for the company's new slogan, which is "Fun to drive again." This one will truly be fun to drive. Don't miss it if you are visiting the 2011 Tokyo Auto Show.