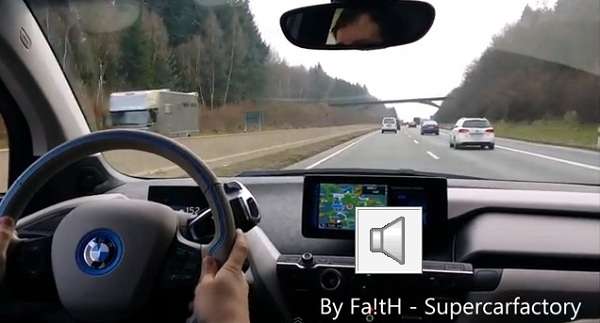 BMW i3 fans always look for existing videos of this electric car and these few videos show the testing of the vehicle's reliability in German Autobahn.
Advertisement

"I am always looking to find exciting video of the i3. Most of them are so boring, slow city speed, talking and talking. I want to see it in action. I just found this one, wrote Martine Philippe in BMW i3 Facebook group and share this video.

This video shows BMW i3's reliability tested on an Autobahn near Frankfurt in Germany.

If you look at the dashboard the car reaches 153 km an hour, which is 95.7 miles per hour. The driver seems smooth, Philippe writes.

The following video is an older one, but in Philippe's opinion more exciting. The i3 is tested on secondary roads. A driver of an unknown car is "chasing" an i3 in secondary roads of what seems to be in Germany. Don't try this.

"BMW want's to only sell it as a "city" car, but as we can see, it handles it's own pretty well in the country side," Philippe concludes.

Then, a group member Ross Pierrepont, shared this video in which i3 is racing against M3. The race is done by professional instructors, organized by BMW during i3's UK launch.

Note how the M3, initially boggs down by its higher weight and inertia, settles into its stride and eventually takes the i3, but only in the 50-60mph segment.

Then, I would also like to share this video, made by BMW itself titled The first-ever BMW i3 Hot Lap.

TorqueNews friend Chris Neff, who has contributed this story about ActiveE being a great EV and a better BMW for snow, is in the passenger seat in this video.