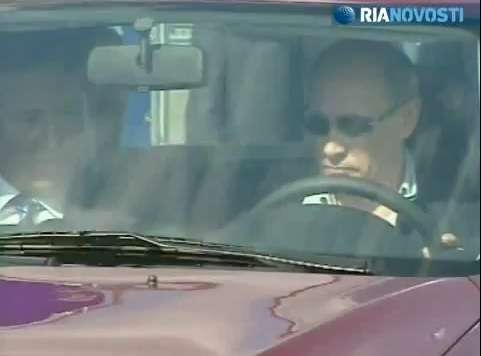 Russian Prime Minister Vladimir Putin's PR at the presentation of LADA Granta, named as Europe's cheapest car, backfired as the car started up only at the sixth time, but there was a reason for it.
Advertisement

Putin was invited to test the new Granta Lada in Togliatti, which can be described as the Detroit of the Russian Auto Industry. However, it took six attempts by the prime minister to get the Euerope's cheapest car started. The sixth attempt was successful because the Premier was explained that the car is equiped with an electronic e-gas pedal.

Although, the starting up was undermined by a recalcitrant starter, Premier Putin, according to TF1, said Lada "is a good car. Overall I liked it."

Putin first checked the trunk of the car, then the rear sit and then after that he sat at the driver's sit to start the car. After five attempts the car start, and actually drove smoothly. Russians have invested so much into the development of the Lada Granta. This single incident does not and should not say much about the car's quality, but obviously a very bad PR for the company and its new model.

Lada Granta comes to replace 2107, which has been serving its consumer for more than a decade.

Frankly speaking one can't expect much by paying only $7,800. No miracle is expected and the future drivers should brace for concessions. The bumpers are black, the rims are steel and the windows are manual. However, one would expect the car being thoroughly checked and the e-gas pedal thing explained when the Prime Minister of the country is going to test drive it.

It's also unfortunate that many other sources covered Lada Granta starting issue as a malfunction, rather than explaining the high-tech e-gas pedal installed in the car. Average Russian cars, do not have e-gas pedals.