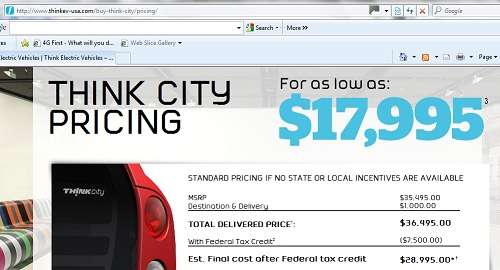 Think USA shows the price of it's THINK City for as low as 17,995, but the fine print makes it virtually very hard to get this electric vehicle at this low price.
Advertisement

According to THINK USA, the Manufacturer’s Suggested Retail Price (MSRP) for THINK City, which is not-in-stone figure and is also known as "sticker" price is $35,495,00. This price is recommended by the manufacturer and used by dealerships as a price to sell cars. This price is normally different from the invoice price.

But wait a minute, the advertised price was "as low as $17,995." Thus, how does one get THINK City electric vehicle for as low as 17,995 USD? THINK says depending on where you live, your cost to own a THINK City may be less.

Then it offers a limited list of U.S. States (not all) that give various incentives and tax breaks for owning an electric vehicle. My state North Carolina is not in that list. Thus my price would be $28, 9950. If your state is not listed in the menu among U.S. states, which THINK provides, that simply means that your state does not offer any additional incentives or credits, and your price would be $28,995.

The total delivery price of $36,495 does not include tax, title and registration and other local fees. As mentioned above, the $7,500 Federal Tax Credit is only for those consumers who qualify for the Federal Plug-In Electric Vehicle tax credit of up to $7,500.00 for electric vehicle purchases.

Finally the $17,995 price. It's for "buyers who qualify for State of Oregon EV incentive, full federal tax credit, and THINK City ZEV discount."

Even the estimated final cost after the tax credit is only "for consumers in ZEV States (CA, CT, ME, MD, MA, NJ, NM, NY, OR, PA, RI, VT) Think offers a $4,000 incentive." Depending on the location of the perspective buyer additional local incentives are available as well.

While THINK USA fully discloses its fine print and to its credit the fine print is larger than average question arises, isn't it time for automakers to come out better and more upfront pricing for their new vehicles? Today's consumer is better education and more aware of the traps hidden in pricing fine print. Today's consumer deserves more respect and the car companies should come up with newer ways to display their prices.

Advertising a $17,995 price tag only for the select few is not going to attract the general population who are going to end up paying nearly ten thousand dollars more than what they see prominently advertised.

Think EV wrote on December 25, 2011 - 10:37pm Permalink
Hi Armen, Appreciate your comment. As you were able to discern, the price varies by state and incentives and we are totally transparent about that. It isn't something that Think can control. In Indiana, the price is $19,995 plus tax, fees, etc. for the first 200 to qualify. Across the border, it is about $10,000 more. In any event, thanks for bringing it to our attention and we'll look at ways to show this more effectively (perhaps a range of $17,995-$XX,XXX depending on your state of residence). As indicated on the site, the price is AS LOW AS and our rules are completely transparent. And we refer people to the pull down window to figure that out. It is very transparent and we've not had any complaints to date to the website. Further, if you've been one of those that have purchased direct from us, our invoices and process is very simple and transparent. Thanks for your input.