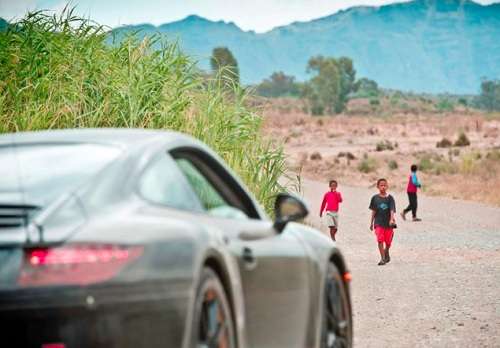 Porsche decided to go to the extremes while offering an insight in the testing of prototypes. One of the images of the prototype turned to be very controversial. Contrasting extreme poverty with extreme luxury, shared on its Facebook Page, backfired.

"Testing is an essential part in the development of any new Porsche. It is only by taking the cars to the extremes that we can ensure that our performance and quality standards are met," wrote Porsche's social media manager on the auto-maker's Facebook page. However, the image, seen on this page, proved controversial with some of the carmaker's fans, who called it "perverse."

The image gallery that Porsche shared, shows the company's drivers testing a new prototype what seems to be in a poor country. It's not clear if this testing is done in Africa or in South America.

This particular image that crated a heated discussion on Porsche's FB fan page, shows the luxury car driving through what seems to be a poverty stricken area, and three unattended boys, coming toward the luxury car.

A stark contrast. Some called it "perverse," others said it's at least "thought provoking."

The image from an artistic point of view is a good shot. It's even inspiring. Yet, it's certain that everyone will draw his or her own conclusion from this image. Two things are certain. One is that Porsche succeeded creating a good buzz about its new prototype. The second is that whether poor or rich, the children should not be unattended on public roads.

WHO are you to come off so sanctimonious as to know what is right or wrong and what is the story is with those children...grow up! Un-be freakin-leavable!

Where's the whole body photo of this beautiful car? But all I can say is, no matter how Portia looks, it will always be an awesome and amazing baby!

I grew up poor and when a car such as this happened to come through my neighborhood, it inspired me. Children are impressionable and luxury should not be shielded from them. I am sure these children were wowed by this awesome machine and even more so that people would come to this remote part of the world in this type of car.

Remember Chitty Chitty Bang Bang? That car was very beautiful and how I wished so much to have the money to buy a car like that, especially when it flew!

How many children in the U.S. who are dirt poor, parents flat broke or out of work, take their children to main street to see the Presdent and his motorcade drive through town?

Again, I see these children being inspired and their lives touched. I see them telling their friends what they saw. I see them thinking about the engine inside the car, how nice it would feel to go very fast on an open road.

Life is about adventure. We can't shelter those who don't have from seeing the world. Isn't that why we dictators are hated so much and several have lost their lives recently? An uneducated nation of people whose only dreams are to feed their own family and exist for another year?

Remember in this country when we got the "car" bug and it became the "American" way to have a car so we can go anywhere? Even to this day, most people around the world are "proud" of their cars. Where did they get this pride? From childhood. From yearning to get a license. From seeing that porsche and saying "Oh man, I will buy one of those when I grow up"