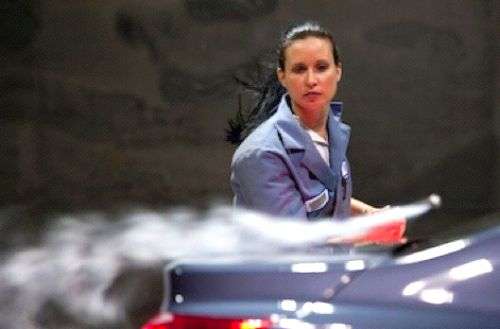 Chevrolet's most fuel-efficient midsize car ever, the 2013 Malibu, was shaped by a pair of unusual engineers – John "Moose" Bednarchik is a self-declared fitness nut who survived a heart attack at 33 and Suzanne "Suzy" Cody, a Camaro-driving roller derby queen with hair dyed blue.
Advertisement

Because of their work, more than 60 factors of wind drag were removed as a result of the Malibu's new shape and fine-tuning of the exterior. These aerodynamic improvements save buyers up to an extra 2.5 miles per gallon on the highway.

Bednarchik is now 39 and the lead aerodynamic engineer for the 2013 Chevy Malibu – he personally knows how big changes can improve efficiency - aerodynamic or otherwise. He lost 100 pounds since his heart attack and maintains weight through a rigorous health/fitness regimen. He participates in a high-intensity strength and conditioning program in Sterling Heights, MI, typically endured by police, firefighters, soldiers and professional athletes.

He channels the same intensity and discipline into his work. After four years of development – more than 400 hours testing and fine-tuning in GM's wind tunnel – Bednarchik has achieved the lowest wind drag for the Chevrolet Malibu or any of their midsize cars in the past 100 years. Wind resistance is responsible for up to one-third of the fuel used at highway speeds.

"A tough training regimen and aerodynamics have a lot in common,” he said. “In each case, you worry about increasing the total efficiency of the body. For aerodynamics, we want forms and surfaces that make the vehicle more slippery when traveling through air. Good aerodynamics means free fuel economy for our customers."

The automaker measures aerodynamic improvements by 0.001 coefficient of drag – each whole-number improvement at three decimal places is called a “count.” Initial testing of pre-production Malibu vehicles in GM's wind tunnel has recorded a low drag coefficient nearly as efficient as the Chevrolet Volt of .28 C(d).

The 2013 Chevy Malibu’s wind resistance was improved 11 counts by rearview mirrors specifically designed to deflect wind without disturbing the airflow. Another 10 counts were achieved by rounding the front corners – from the bottom of the fascia up through the headlamps – to help air flow smoothly along the Malibu's sides.

Shutters in the lower grill opening on select models open and close automatically to shave another seven counts. This measure increases cooling airflow to the engine when needed, such as under high engine loads at low speeds, reducing aerodynamic drag when extra cooling isn’t needed.

Suzanne Cody, a 34-year-old mother of two works by day to make the all-new Malibu more efficient. During the evening, she is "Shovey Camaro," a member of the Bath City Roller Girls derby team from Mt. Clemens, MI. Her jersey reads "6.2L," a tribute to the V-8 engine in her 2010 Camaro SS, while her blue hair demonstrates her passion for General Motors.

"Negotiating the competing interests of design, manufacturing and vehicle engineers – all of whom have different goals for an individual part or the vehicle's overall design – can be inspiring," said Cody. "But we all have a common goal – to give Malibu customers around the world Chevrolet's most fuel-efficient midsize car ever."

"When all the other moms pull up to school in their minivans or crossovers, I arrive in my Inferno Orange, 426-horsepower Camaro Coupe with my blue hair and twin child seats in tow," said Cody. "I usually get a few laughs and some stares, but roller derby has given me the confidence I need to aggressively work toward my goals.

"For a lot of people, their work and private lives are fairly well segregated, but that doesn't work for me. I apply the same passion at the roller derby and at work, to benefit our customers."

The process was painstaking, as it sometimes required midnight shifts in GM's wind tunnel in Warren, MI. They would often test aerodynamic part changes as small as 1 millimeter at a time, with certain parts of the Malibu being examined multiple times until they were satisfied they'd achieved the greatest efficiency possible.

Though aerodynamics were their primary focus, Bednarchik and Cody also needed to create a 2013 Chevy Malibu meeting the governmental safety requirements of countries around the world.

"The Malibu was my first assignment on a truly global program, so I spent a lot of time researching the different standards around the world," said Bednarchik. "For example, smaller mirrors could improve aerodynamics further, but each global market has requirements for mirror size that must be met.

"Ultimately, we were able to design the Malibu so that drivers around the world would benefit from aerodynamics, or free fuel economy for our customers," Bednarchik said. "It's amazing when I think that the design decisions we made in the wind tunnel could save Malibu buyers around the world hundreds – if not thousands – of dollars at the pump."

The new 2013 Chevy Malibu will be sold in nearly 100 countries on six continents. In North America it will be available in LS, LT, ECO and LTZ models. Production is scheduled to begin in early 2012 with the ECO model. Malibu will be built in multiple locations around the globe, including the Fairfax, KS and Detroit-Hamtramck, MI assembly plants. Pricing will be announced later this year.