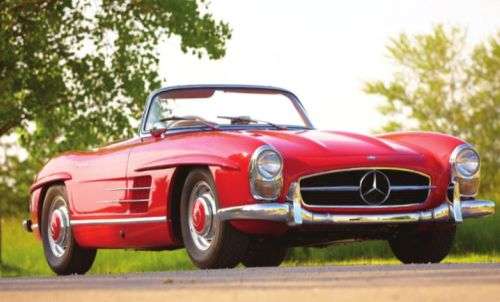 As a highlight of The Gooding Auction at Pebble Beach , singer/songwriter Sheryl Crow’s 1959 Mercedes-Benz 190 SL roadster will be sold August 21 to benefit the Joplin Schools Recovery Fund.
Advertisement

The sale happens as a celebration of the history of the automobile and the 125 year anniversary of the Mercedes-Benz 1886 Patent Motorwagen comes to the Monterey Peninsula for the annual Pebble Beach Automotive Week and Concours d'Elegance August 16-21.

One exceptional aspect of the five-day extravaganza is a number of Mercedes-Benz’ world-class collector cars, spanning much of the marque's famed history. On August 21st, The Pebble Beach Concours d'Elegance is featuring five special classes across the famed 18th fairway to mark Mercedes-Benz 125 year anniversary including one class with nine pre-war Grand Prix vehicles known as "white knights."

The classes will also include Mercedes-Benz 380K-770K, 300 SL Gullwings and Roadsters, as well as a preservation and 125 year celebration group covering Benz, Daimler, Mercedes and Mercedes-Benz.

Over fifty cars, including some of the rarest examples of the Mercedes-Benz brand, will be in Monterey, some coming from as far away as Europe and South America.

The Mercedes-Benz Star Lounge on the 3rd Fairway that leads to the Lodge at Pebble Beach will also be themed about the anniversary. It will feature not only rare classics such as the American Mercedes of 1905, built in conjunction with the William Steinway Co. in Long Island City, but also coming Mercedes-Benz innovations like the 2012 SLS AMG Roadster and the Concept A-Class.

Several exclusive auctions will also taking place with a number of rare Mercedes-Benz vehicles up for bid. Headlining RM Auctions' Monterey sale, August 20th, is an exquisite 1937 Mercedes-Benz 540 K Spezial Roadster, chassis 154140, from the private collection of Sam and Emily Mann. One of just a select few built with the most desirable configuration of high door, long tail and covered rear spare, of which it is believed just three examples survive, 154140 is expected to establish a new world record for a Mercedes-Benz sold at auction when the high bid is registered this Saturday evening.

The stunning 540 K will be surrounded by an impressive series of four other supercharged eight-cylinder cars from the 1930s - each recently inspected by an expert from Mercedes-Benz Classic in Germany - as RM Auctions celebrates the marque's 125th anniversary with one of the most important collections of Mercedes-Benz automobiles ever offered at public auction. For more information, click here.

"The Pebble Beach Concours d'Elegance showcases special vehicles every year, but this coming weekend establishes a new realm to mark a historical milestone for the Mercedes-Benz brand," said Ernst Lieb, President and CEO of Mercedes-Benz USA. "There are treasures from every era descending on to Monterey, which captures the essence and fascination of the three pointed star from design to innovation, and a legacy that is unmatched."