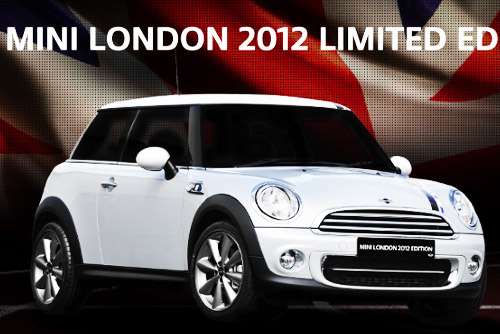 In the 1960’s the Mini Cooper was an immense source of British Pride and so it is only fitting that nine of the 2012 Mini London Limited Edition cars built should play a tribute to the British Olympic Team.
Advertisement

MINI teamed up with the London Philharmonic Orchestra before the London 2012 Games to honk up a rousing rendition of God Save the Queen on nothing but MINI horns.

Nine musicians were selected from the London Philharmonic horn section, normally players of woodwind and brass instruments such as the clarinet, trumpet and trombone. In the MINI Orchestra they played the horns of nine MINI London 2012 special editions all decked out in the red, blue and white of the Union Jack.

“It's the first time that we've attempted to play a piece using just car horns, and it was a fun and unique experience,” said Gareth Newman, conductor of the MINI Orchestra.

The MINI Orchestra is just the most recent of MINI Team GB adventures. As an official partner of Team GB and Parlaympics GB, during the last year and a half MINI has created numerous inspirational and fun events to rally the nation to active support of the home teams' athletes.

"MINI is best known for highly tuned, sweet sounding engines, so we are delighted to discover that a patriotic harmony can be created with the car's horn,” added Jochen Goller, Director, MINI UK. “We hope that this rendition of God Save the Queen will help rally Team GB to victory."

Notably, the car's manufacturer, BMW, has just set a worldwide sales record for the first six months of any year with 900,539 vehicles delivered worldwide, an increase of 8.1% over the same period last year – over 67,000 more units sold.

The company also achieved its second highest single month sales volume ever, with 172,516 BMW, MINI and Rolls-Royce brand vehicles delivered across the globe in June, a year-to-year increase of 4 percent.