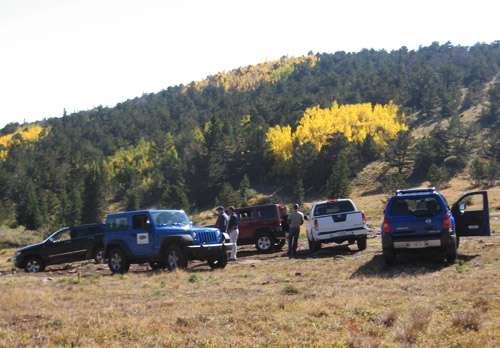 When the Rocky Mountain Automotive Press held the first ever 4XFall event last week, ground was broken to create one of the outstanding automotive media events in the nation.
Advertisement

Though there are numerous Four Wheeler clubs throughout the Western states and beyond, the RMAP 4XFall is the premiere event bringing the manufacturers along with their four-wheel and all-wheel-drive vehicles to Colorado’s majestic mountains.

Here members of the automotive media can see what 4X4's, pickups and AWD SUVs and crossovers can do on the offroad trails some consider their bragging rights. We all know most SUV buyers seldom if ever take their vehicles off the pavement, but if a vehicle is promoted as able to go wherever you want, then it should be able to back up its claim, no?

“Most people live in a city and they go to the mountains only on a summer vacation,” said Roman Mica of RMAP, “but they want to know if they do take their crossover or SUV off the beaten path it will not get stuck with the family at whatever river or campsite they’re going to.”

In all fairness, we have to mention the annual Texas Truck Rodeo, scheduled this year for Oct. 18-20, at which members of the Texas Auto Writers take anything that can be called a truck out to the Knibbe Ranch. This 22,000-acre spread is 28 miles north of San Antonio in the Texas Hill country – still run by a fifth-generation great-great grandson of the original rancher. This is one of the prettiest parts of Texas along the Guadalupe River, but it’s far from the Rocky Mountains.

Torque News recently talked with Roman Mica, publisher of TFLcar.com, EverymanTRI.com and former president of RMAP, as well as Paul Shippey, president and CEO of Automotive Media Solutions (AMS), two of the principals behind the 4XFall about its genesis.

Roman Mica was president of RMAP in 2010, when discussion of having a Denver regional track day evolved into the first annual Rocky Mountain Driving Experience. Unlike other such gatherings around the country, it consisted not just testing out new vehicles at High Plains Raceway, but also involved elements of street and highway driving plus an offroad exercise held at Colorado Off Rode Extreme (CORE).

At the CORE site the media could drive an offroad rally course on the high, rolling plains of Eastern Colorado and also put 4X4’s through a three or four obstacle technical course. It was out of this the idea of a true Four-wheel-drive event for the media sprouted.

“The RMDE had been to the same place the last three years (at CORE) and we thought it would be fun to separate that out and do something that’s really Colorado,” Mica said. “Where we are at is an offroad extreme park – so we thought why not put it in the mountains where it belongs.”

So that was the kernel of thought from which the 4XFall began its genesis. Of course, like many ideas, it was much easier said than done.

“Getting the manufacturers to trust us to not damage the cars was a big thing,” Mica added. “Testing a vehicle on the road is one thing but testing it over a boulder is something else, and there’s not much between testing and damaging.”

So this is where Paul Shippey comes into the picture as the liaison between the manufacturers and RMAP for both the RMDE and 4XFall.

He noted that only four out of a potential 16 manufacturers signed on for this initial event, though it may have been a matter of budgeting after the RMDE event last June. However some were unavailable because of a scheduling conflict with Run to the Sun, an annual swap meet and show in Lake Havasu, AZ.

Or it may be a let’s wait and see what this new event’s all about first attitude.

“We’ll see how it goes next year,” Shippey said. “I think that it’s more of a rugged four-wheel-drive event can scare people off. ”

One of the manufacturer reps was a bit concerned about his crossover vehicles, not really intended for offroad driving, but all-wheel-drive just the same. After running the milder courses designated for such cars, he was reassured.

However, for the man between the vehicles and the journalists, the first ever 4XFall was a nightmare of serious contingencies. One of which is simply weather in Colorado – at 10,000 ft summer can turn to winter in the blink of an eye some years. Fortunately, this year provided a perfect day for the expedition to Caribou CO and vicinity.

The last part of the event led down Switzer Trail a one-lane wide former rail line route, along which ore from Gold Hill was once ferried to the Front Range.

“If on the Switzer Trail we had a problem like two flat tires or a broken axle, sections of the trail are very narrow,” he said. “You can’t back a car out of there, you can’t even turn around, so we had to have back up vehicles and plan escape routes. We had to add support vehicles in the front and at the back in case a vehicle in the middle of the convoy broke down.”

Fifteen vehicles on a trail too narrow to turn around and one in the middle balks – what do you do?

“That adds a whole different dynamic,” Shippey continued. “We had a plan in place to attack from the two ends of the convoy. We identified turn out spots so if a vehicle broke down or had an issue, we could drive cars backwards in reverse to a place where we could get through or get the vehicles ahead of a stricken vehicle to where a recovery vehicle could get in.”

They also had to plan how to retrieve a car if it broke down on any of the three varied levels of offroad courses, so rescue and recovery took a lot of planning work.

In the final analysis, the vehicles performed admirably in their true offroad trial, with only a couple suffering a bruise or blemish from the expedition. The weather cooperated and all in all it was a spectacular day in the Colorado Rockies, exploring the countryside and the capabilities of the various vehicles.

“We got really lucky the weather wasn’t bad and a lot of this came together because of the team at RMAP,“ concluded Mica. “So I’m very grateful to everyone who put a lot of time and work in to make it happen – because it WAS NOT EASY!

Thus, a premiere auto event that could conceivably earn the respect of the national media came to be – and at 10,000 ft in the Colorado Rockies, the sky is the only limit.

LG's New EV Battery Plant Is a Welcome News for Tesla
Tesla Giga Berlin's New Hurdle: It's Not Only the Gov't, but Now Tesla Itself
END_OF_DOCUMENT_TOKEN_TO_BE_REPLACED