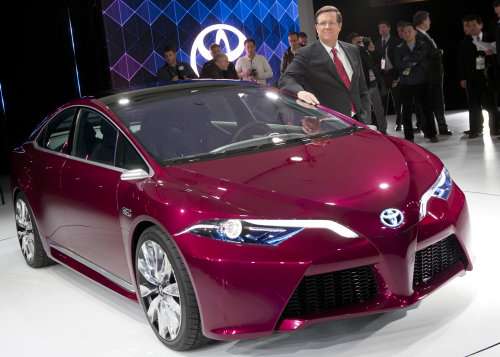 Addressing the Bank of America Merrill Lynch 2012 Auto Summit today, Jim Lentz, President and CEO of Toyota stated the brand is back at the top of their game.
Advertisement

He provided an overview of Toyota’s view of the year ahead, their new brand and vehicle strategy as well as the direction their future vehicle design and technology will take.

He admitted 2011 was a challenging year but that production is back to optimal levels and that even despite difficulty, the brand still achieved a number of accomplishments enumerated as follows:
• The Toyota Camry remained the top selling car in America for the 10th straight year.
• The Tacoma became the most popular small pickup.
• The Corolla was named the best-selling compact car.
• The Sienna became the best-selling minivan for the very first time.
• Predictably, the Prius remains the top-selling hybrid, not only in the U.S., but the world at large.

“Given our momentum coming out of 2011 and strong new product introductions this year,” Lentz said with a smile, “we expect total TMS sales of about 1.9 million units… up about 15 percent.”

He noted sales so far this year are up 13 percent, while Toyota is progressing at 12.3 percent. Lentz pointed out numerous aspects forecasting healthy growth including robust population increases, an aging national fleet, the high value of used cars, looser credit and better vehicle value compare to the last two decades of the 20th century.

“We also believe most of the industry growth will come in retail sales, an area where TMS has traditionally performed best,” he continued, “and while we recently filled some fleet orders to make up for those impacted during the earthquake aftermath, we will keep our fleet sales below 10% this year – lower than most other automakers.”

Lentz said Toyota will continue to judiciously apply incentives, hold the number of dealerships nationally to 1,500 to assure their profitability and reported plans for a billion dollars in showroom upgrades over the coming year.

“Finally, we continue to build cars where we sell them. Within the last six months, we opened a 2,000-job plant in Mississippi to build Corollas. We announced plans to expand Highlander production in Indiana, RAV4 production in Canada and transmissions in West Virginia. We’ll have more announcements on local expansion and job creation in the future,” he promised.

Such efforts have resulted in the fact that over 70 percent of the vehicles Toyota sells in America are built right here at home. Of those, over 75 percent of the component content is American made.

The company is working hard to overcome the bad press of recent recalls, and is once again ranking as the best in nation for quality, verified by J.D. Power, and in consumer perception, as defined by Consumer Reports.

J.D. Power’s vehicle dependability study ranked Lexus Number One overall, Toyota as the highest-rated non-premium brand, and moving Scion up 17 levels in the rankings of brand reliability. Toyota vehicles score the highest in 8 or 14 vehicle segments.

Touching briefly on the new Toyota Care program, providing complimentary service for the first two years of ownership, Lentz pointed out the effect it is having on their sales:
• A full 28 percent of buyers state Toyota Care influenced their selection.
• An astonishing 98 percent of all Toyota Care recipients return to the dealership for service, resulting in dealers retaining 232.000 more service customers last year than in 2010.

Toyota is planning to launch 19 new or significantly updated vehicles during 2012, a milestone for the company. Factoring in the success of the renewed Camry and Yaris, added to the brand new Prius v, the company expects 40 percent of their sales this year to come from new products.

“Traditionally, quality goes up over a model’s lifecycle and then goes down when a new-generation launches,” Lentz stated. “However, based on data for the first six months, the quality of our new Camry is scoring BETTER than the model it replaced. That’s unheard of in the industry.”

Briefly touching on the highlights of the coming year for Toyota, Prius, Lexus and Scion, Lentz touched on the technology in development.
• They are fine-tuning combustion engines and reducing vehicle weight to increase mileage and lessen emissions.
• Advanced solid-state and metal-air batteries are in development that “greatly exceed” the performance of today’s lithium ion cells.
• Toyota is pursuing the use of more carbon-neutral, eco-plastics made in part from plants for interior components of vehicles.
• Also in development is a zero-emission, hydrogen fuel cell vehicle slated for release during 2015.

“Our goal is to create a variety of vehicles for the future that can run on gas or other fuels and then let CONSUMERS determine what works best for them. Whichever way consumers decide to go, we strongly believe that hybrids will remain a core technology because our hybrid systems can easily be adapted to other powertrains to further conserve energy.”

Lentz then touched on two electric cars the brand will bring to market this year, the RAV4-EV and the iQ-EV. Talking about highlights at NYIAS he mentioned the new Lexus ES and ES Hybrid as well as the LF-LC concept coupe that debuted earlier this year.

“Tomorrow we will debut a future Toyota product that’s unlike any Toyota you’ve ever seen,” he teased. “You won’t want to miss it.”
As the Ban of America Merrill Lynch 2012 Auto Summit neared its conclusion, Toyota’s CEO closed on a bright note to all.

“We strongly believe that we have ALL the ingredients to make 2012 a break-out year for Toyota and we’re in a great position for even STRONGER growth in the future,” Lentz proclaimed. “It’s not about being the biggest in the world; it’s about being the best for our customers all around the world.”