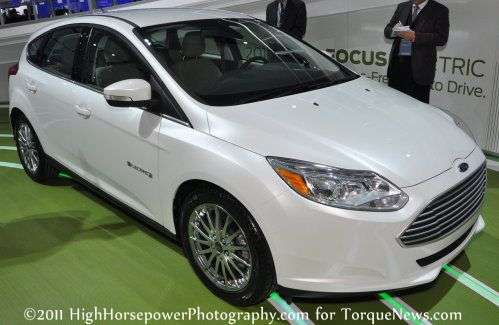 Ford’s 2012 Focus Electric to have one cool battery

When Ford’s new Electric 2012 Focus hits the streets later this year, it will have one cool battery thanks to a liquid temperature control system that will maintain the optimal thermal range for both charging or powering the motor, whatever the weather. The Electric Focus is the first all-electric, gasoline-free vehicle in the brand’s line, with four more models yet to be released during the next year and a half.
Advertisement

When summer’s heat comes around folks have all sorts of ways to cope with it. They can plop down in front of the cooler, go for a swim, suck down lemonade or mint juleps, run through sprinklers or sit in front of fans with a spray bottle full of cold water.

Batteries, like people, don’t always work their best in extreme heat, but engineers at Ford have developed a system to cool the Focus Electric’s lithium-ion battery and keep it working even in the hottest of conditions.

Range is an issue with electric vehicles and both heat and cold can rob a battery of power, thereby diminishing the range of an electric vehicle. That's why Ford will employ an advanced liquid-cooling and heating system to regulate the temperature of lithium-ion battery packs, though they are designed to operate under fair range of ambient conditions.

"If the battery became too hot, we would have to limit the use of energy to protect it. The liquid cooled system allows us to reduce those constraints and get the most out of the battery," said Dave Fabricatore, an engineer on the Thermal Program Management team. "We're helping owners by making sure their battery is always ready to go regardless of the weather."

The 2012 Ford Focus Electric will use an integrated cooling system to keep the various vehicle systems at their optimal operating temperatures. The air conditioning is actually used to refrigerate the coolant going to the battery using a "chiller," so as the coolant passes through, the temperature is lowered to what the battery prefers. Temperature sensors throughout the vehicle alert the system when it needs activation.

The cooling even works when charging, reducing the time required in hot climates since the battery is kept at the desired temperature.

"Batteries can heat up when they're charging or being used, and it's made worse by ambient temperatures," said Fabricatore. "Controlling the temperature lets us deliver the best range and power for the customer, while improving the longevity of the battery."

The 2012 Ford Focus Electric will launch in late 2011 in 19 pilot markets. The liquid cooled battery system may prove to be an advantage over air-cooled all-electric vehicles, especially in the warmer markets. The vehicle’s initial launch in warmer weather markets will include Atlanta, Austin, Houston, Los Angeles, San Diego, Orlando, Fla., Phoenix and Tucson, Ariz., Raleigh-Durham, N.C. and Richmond, Va.