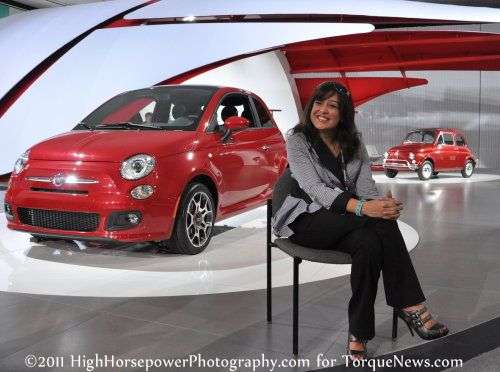 “A little more than a year ago, I promised President Calderon that I would be back to celebrate the launch of the Fiat 500 and I am pleased that I could keep that promise today,” said Marchionne. “With the assistance of the Mexican government, we have been able to prepare the Toluca Assembly Plant for production of the first Fiat, a vehicle that demonstrates the level of cooperation between our two companies and reintroduces the brand to the North American market after more than 28 years.”

President Calderon and Marchionne were joined by the president and CEO of Chrysler de Mexico Joe ChamaSrour, other local officials and employees from the Toluca Assembly Plant, where the Fiat 500 is built, to acknowledge the importance of the plant, its workers and the new vehicle in the success of the company.

The Fiat 500 is one of 16 new or significantly reinvented vehicles in their lineup and one of two fresh nameplates Chrysler launched during 2010.

Since February of last year Chrysler has invested $550 million, with the assistance of loans from the Mexican government, to gear up to build the new Fiat model in its Toluca plant. That investment added 622 jobs to support production in building more than 120,000 vehicles for export to the U.S., Canada and South America – even China by the third quarter of 2011.

“Fiat 500 production here is an important landmark because it reaffirms Chrysler’s commitment to Mexico that dates back to 1938,” said Marchionne. “Mexico is in an ideal position for production of this car. Because of its free-trade agreements with neighbors to both the north and south, it is a bridge between NAFTA and Latin America.

“For the Mexican market, where the 500 has already been sold for several years, this marks an important shift from a vehicle imported from Europe to one that is built locally,” said Marchionne.

Chrysler has nearly 7,000 employees and six plants in Mexico, where Ram trucks are built along with the new 3.6-liter Pentastar V-6 engine, fabricated in Saltillo, as well as stamping operations.

The Fiat 500 promised to deliver beautiful Italian styling, timeless functionality, efficient design and innovative technology – the same attributes that made the original version an icon.

We question how much style can be put into a commuter car but sincerely hope they can deliver on the rest and look forward to a test drive sometime this year.

The classic model they are drawing upon was indeed iconic and popular but we wouldn’t exactly call it stylish.

It will offer an new fuel-efficient 1.4-liter MultiAir® engine with eco: Drive™ Application, TomTom® Navigation and BLUE&ME™ Handsfree technology. Further, it features seven standard air bags and is said to be further enhanced with “new quality and refinement adaptations for the U.S. market, including an all-new six-speed automatic transmission.”

The Toluca Assembly Plant was completed in 1968 and has been producing various Chrysler vehicles for both domestic and export markets since. The plant produced the Chrysler PT Cruiser from 2000 until July 2010. Production of the Dodge Journey began January 2008 and the Fiat 500 in December last year.