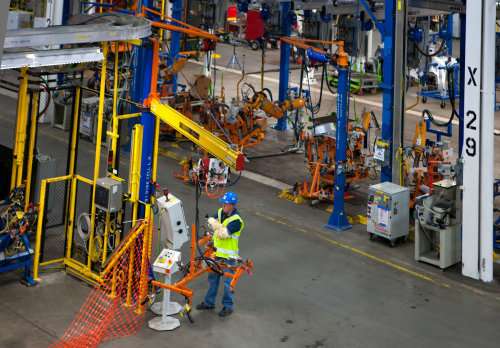 The Big 3 readying for an auto builder’s blitz

As the Big Three’s market share improves as a result of the popularity of new models, and Japanese imports are impacted by the national disaster there, Detroit has rehired many workers laid off during the recent downturn. Further they are preparing for a massive hiring blitz – but something has changed significantly for these new hires – their rate of compensation.
Advertisement

This is great news for Detroit and Michigan in general, according to a report in The Detroit News filed today by Christina Rogers.

In the days before the recession, auto workers averaged $28 per hour, among the highest paid factory workers in the U.S. Today’s hires start at $14 per hour – not bad but under the U.S. factory average of $18.89 an hour.

According to CAR, the three manufacturers are expected to hire over 34,000 new hourly and salaried employees over the next three years, though the breakdown between the two is not revealed.

Chrysler started the trend last year, adding a shift and 1,200 new employees at its Jefferson North Assembly plant in Detroit. The auto builder also expects to hire another 900 workers this year at their Sterling Heights Assembly Plant.

They will be mostly new hires, according to Chrysler spokeswoman Jodi Tinson.

Ford plans to fill about 1,800 jobs by adding shifts late this year in their Louisville, KY assembly plant. The manufacturer believes, at this point, they will need another 4,700 workers by the end of next year and many of their new jobs will go to new hires, as only 400 workers remain in their layoff pool. Roughly 1,800 temps will get first preference.

General Motors Co. also plans to add jobs, including 2,500 at Detroit-Hamtramck Assembly, where they will build three different Chevys night and day; 750 at its Flint truck plant; and 600 to work on a new small Cadillac at the Lansing Grand River plant. They plan to recall 1,350 workers on layoff by September, making way for new hires.

GM is not accepting applications for hourly work as yet and workers laid-off have first recall rights, right before transfers.

"There are a lot of people that are unemployed," Johnson said, noting the state’s unemployment was still at 10.2 percent in April. "I don't think the auto companies will have any trouble attracting people. I suspect there'll be long lines of people to apply for those jobs."

The big news is the difference in pay and benefits – what was once considered a lifetime job may not be exactly that anymore.

United Auto Workers' Vice President Joe Ashton, who represents GM workers at negotiations, wants the base wage rate increased and greater advancement opportunity for tier-two workers. It will be an issue during coming contract talks.

Ashton pointedly described the $14-an-hour pay — about $30,000 a year — as not a middle-class wage. "We're not looking to make plants uncompetitive, but we're looking for people to make a decent wage," he said.